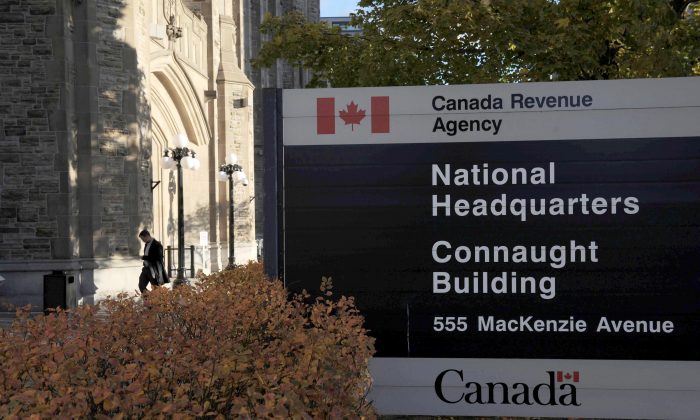 The Canada Revenue Agency (CRA) headquarters in Ottawa. The ombudsman for Canadian taxpayers is offering a new assurance for people who fear there may be a backlash if they lodge a complaint against the CRA. (THE CANADIAN PRESS/Sean Kilpatrick)
Canada

Taxpayers Promised No Reprisals When Lodging a Complaint Against the Taxman

TORONTO—The ombudsman for Canadian taxpayers is offering a new assurance for people who fear there may be a backlash if they lodge a complaint against the revenue department.

Ombudsman J. Paul Dube has announced an addition to the Taxpayer Bill of Rights that says Canadians are entitled to lodge service complaints and request formal reviews without fear of reprisal from the Canadian Revenue Agency.

Dube said the new right was created because some taxpayers are concerned about exercising their rights when dealing with the CRA.

“They fear being put on a black list or being subjected to more frequent audits or having penalties and interest imposed,” said Dube.

He made the announcement Wednesday with federal Revenue Minister Gail Shea, who said the move would change the internal review process of complaints, but would not create any new jobs at the CRA.

“In the past if someone felt there had been some sort of a reprisal for a complaint that would have probably have been dealt with by that employee’s supervisor,” said Shea.

“Now the complaint will be dealt with by a whole other section of the department at headquarters.”

The new addition to the bill of rights has the support of the Canadian Taxpayers Federation, a taxpayer advocacy group.

“We hear absolutely heartbreaking stories about people who run afoul of the CRA,” said Gregory Thomas, the federation’s federal director.

“They get caught up in what they perceive as a bureaucratic nightmare and it has a tremendous negative impact on their businesses, their work life, and on their family life.”

While Thomas said he had never come across an instance of the CRA launching reprisals against complainants, he thinks Canadians will appreciate the added clarity when they deal with the agency.

“Whether or not these fears are real, I can tell you that people really have these fears,” said Thomas.

Dube also said he had never seen CRA reprisals against taxpayers during his five years as ombudsman but he still felt it was important to expand the Taxpayer Bill of Rights.