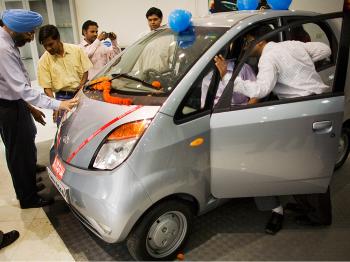 The world's cheapest car, A Tata Nano is inspected by members of the public on display in a Tata showroom in New Delhi, India. (Daniel Berehulak/Getty Images)
Business & Economy

Tata Goes All In With the Nano

Demand for the car is at an unprecedented height, despite an application cost of 300 rupees ($6). Tata will make quite a bundle from just selling the application form. By April 8, around 50 million people had already hit the Tata Nano Web site.

“The company’s Web site crashed,” an April Knowledge @ Wharton (KW) article said. “A crash is not good news for any automobile company, but this one—a barometer of the heightened interest in the Nano among Indian consumers—evidently was.”

Nineteen Indian Banks are standing in line to finance potential buyers, according to Tata’s Web site. Interest rates range between 9 percent and 14.25 percent, with United Bank of India offering a 9 percent interest rate and the Federal Bank Ltd. offering loans of 14.25 percent.

Tata will select the first 100,000 deliveries through a “computerized random selection process,” according to a recent press release. The winners would pay for the car immediately with a deposit, and in return, Tata would pay them 8.5 percent interest on their deposit until the car is delivered. Those who did not get selected may have to wait for more than two years before they can get the car, and likely at a higher price.

Amit Azad, director of Azad Financial Services, disagrees with all the hype and does not believe that the low price of the Nano is sustainable in the long run. “The current price [of the Nano] is due to vanity and ego,” he was quoted by KW.

But the academia world believes that the Nano undoubtedly should have a market, especially in this market. The Nano “is in sync with recessionary times—low cost, low budgets and lower spending,” Amit Mookerjee, professor at the Indian Institute of Management Lucknow, said in the KW article.

The Nano does not meet European or American safety standards by a large margin. According to media reports, the car lacks airbags and does not have an anti-lock braking system and could be a liability in an accident.

"The Tatas are already working on the Tata Europa, a jazzed-up version of the Nano for the export market," CEO Ratan Tata told KW. Tata did not address the safety standards required in foreign markets.

Tata announced on its Web site that the Nanos “safety performance exceeds regulatory requirements in India… The car has low carbon dioxide emissions, thereby providing the twin benefits of an affordable transportation solution with a low carbon footprint.”

Some experts say that may be true, but when 100,000 Nano's are on India’s roads, the situation would be completely different.

According to India’s Down to Earth (DTE) magazine, the Tata Nano is heavily subsidized. Local government took land from farmers for a mere pittance, using the Indian Land Acquisition Act of 1984, under the eminent domain/public purpose doctrine. The land was subsequently sold cheaply to Tata to build a factory.

“India’s cheapest car piggy-backs on subsidies,” DTE alleges. “Tata may have gotten away with the mother of all subsidies.”

Tata received interest-free capital to build the plant, along with other concessions that were kept hidden from the public, according to a recent DTE article titled “What Fuels Nano.”

The secrecy of the deal between Tata and State of West Bengal was upheld by the Calcutta High court. Tata’s lawyers won the battle by arguing that “the agreement between the three parties was a trade secret and could not be put in the public sphere.”

DTE claims that a dichotomy exists, as Tata’s lawyers argued that the project was a “private commercial venture, yet the land was turned over to Tata at a fraction of the true cost under the “public purpose” doctrine.

Digging deeply, DTE discovered that the subsidy included “land, power, tax paybacks and a soft loan of 200 crore ($40.3 million).” A soft loan is a loan with a below-market rate of interest.

“I don’t think the Nano will change the financial landscape for Tata Motors. But it certainly gets them a lot of publicity, visibility and media coverage,” said Sumit Bali, CEO of Kotak Mahindra Prime, the auto finance arm of the Kotak Group, in the KW article.

Financial experts agree that the Nano would not improve the financial condition of the company, but could be enough to cover the $2 billion bridge loan for the Jaguar Land Rover due soon.

“Money is both expensive and difficult to find in these risk-averse times,” The KW researchers said. Tata will find it difficult to borrow, given that Standard & Poor’s, a global rating agency, downgraded Tata Group’s ratings due for cash flow problems, substantial debt, and deteriorating market conditions.

Effect on the Global Auto Industry

The Nano put Tata’s competition into high gear. Its long waiting period plays into the hands of the competition, which may sweeten the sale of its small cars or come up with other low priced, no-frills cars.

Volkswagen’s partner in India, Skoda, announced that it would have its version of a low cost small car available as soon as next year.

Experts agree that the Nano is unlikely to change the composition of auto buyers. Those who want luxury cars, are worried about their safety, or can afford a bigger car would likely not buy the Nano. Most rickshaw manufacturers are not worried either, because the price of the Nano is still out of reach for most Indians.

“The Nano is a disruptive technology and will have an impact on the auto industry both in India and the world over. It has the potential to reshape the automotive world,” Bali said in the KW article.

The Nano “is an example of how clever engineering can create a new market segment,” Shekar Viswanathan, deputy managing director at Toyota Kirloskar Motor, said in the KW article.