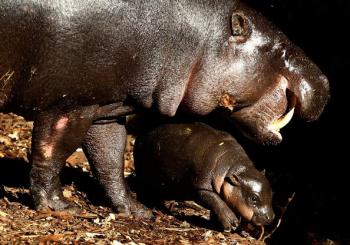 Kambiri, a baby pygmy hippo calf, explores her den with her mother Petre at the Taronga Zoo on Aug. 5, 2010 in Sydney, Australia. (Brendon Thorne/Getty Images)
US

The baby hippo is “quite cheeky” and visitors will have to be patient when they see her in the next couple of weeks, Zoo spokesperson Danielle McGill said.

Kambiri, a Nigerian name meaning 'allow me to join the family,' is the second calf to be born to mother Petre and father Timmy.

Kambiri was born on June 26 at 2:30 a.m. (AEST) and weighed 5.3 kg. She walked around her enclosure for an hour before she was put to bed, her keeper said.

Pygmy hippos are solitary, nocturnal, forest-dwelling creatures. Little is known about them in the wild, and the majority of recorded research has been learned from hippos kept in zoos, according to the Taronga Zoo website.

The World Conservation Union estimates that there are fewer than 3,000 pygmy hippos remaining in the wild, primarily threatened by loss of habitat as forests are logged and converted to farm land. The hippos are also vulnerable to poaching, hunting, natural predators and war.