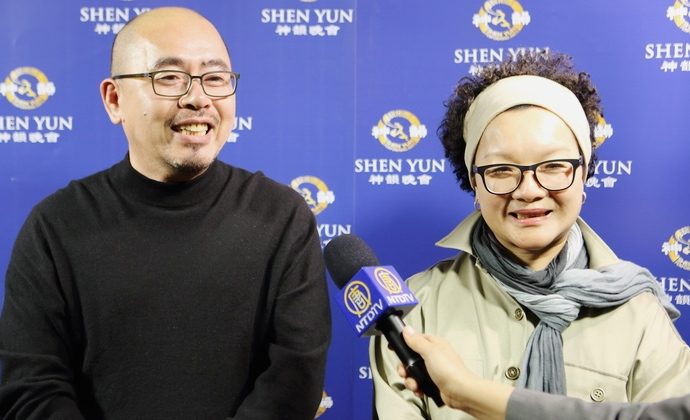 Hsu Hungtu, a poet, a writer and a photographer, and his wife at the third Shen Yun performance in Taoyuan on March 27, 2015. (Lin Shijie/Epoch Times)

TAOYUAN, Taiwan—A multi-talented artist said “The soprano is singing so well that she has reached beyond the realm of a human being.” Hsu Hungtu, a poet, a writer and a photographer, attended the New York-based Shen Yun Performing Arts at Taoyuan’s Taoyuan Arts Center.

The performance included soprano soloists that sing bel canto style with Chinese lyrics. And according to the Shen Yun website, the Chinese lyrics philosophize on the origins and meanings of life.

“It is not easy for singers to (use the bel canto technique to sing in Chinese). It is different from the normal opera singing,” said Mr. Hsu. “So the soloists are able to sing from their hearts for the audience to appreciate the glory of deities.”

The heavenly power was in full display in the last program, The Divine Renaissance Begins, said Mr. Hsu. “When I saw the image of Falun, I felt that it was a power given to us human beings by the heaven.”

Shen Yun has a mission to revive the 5,000 years of the divinely inspired culture. Many of the dance pieces carry a storyline—stories and legends from ancient and modern China—all performed in the classical Chinese dance style, an ancient art form passing down for thousands of years.

“Unlike what others might see as an disaster for humankind, I see (Falun Gong practitioners) taking the lead, to show the public that Gods do exist,” added Ms. Shu in commenting on the last program.

“There is a greater force guiding us regardless of what we do in this mundane world,” said said Chuang Kaiju, general manager of BoEr Design Company, who brought her son for the sixth and final performance at Taoyuan.

“Such force is a the true essence of our ancient Chinese culture,” said Ms. Chuang, who added that children nowadays rarely get expose to something like this when watching cartoons and television.

The different myths, legends, and heroic stories from history presented by Shen Yun were great for her children, said Ms. Chuang, who explained that all of these are real treasures of ancient Chinese culture.

“My son is able to understand the meanings and moral lessons behind these stories,” said Ms. Chuang. “I believe this is a good, compassionate, and positive educational lesson.”

Ms. Chuang said one program that stood out for her was Outlaw of Mt. Liang, commenting “The story of Lin Chong, his longing for his family, his suffering at the hand of a corrupt official, his desire to protect his country, are all portrayed in a way that resonates with the audience.”

“I truly appreciate the messages of peace, respect and tolerance shown by Shen Yun,” said Chuang Yingchun, director of the design department at Cogent Group.

“I simply treasured every single moment while I was watching,” said Mr. Chuang.

[Mr. Chuang and Ms. Chuang are not related.]