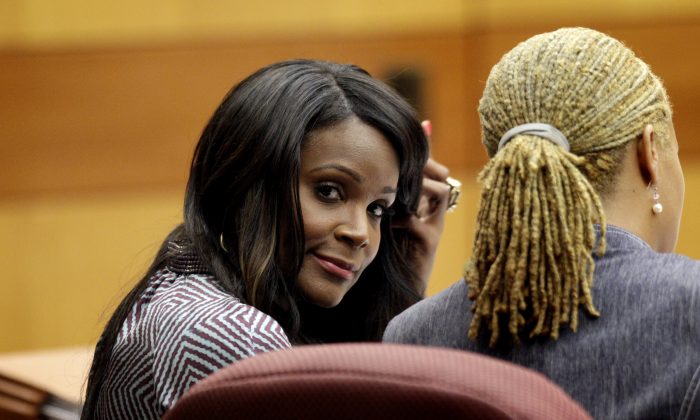 Tameka Foster Raymond, left, ex-wife of Hip-hop artist Usher Raymond, talks with her attorney Lisa West in court for a custody fight involving their two sons in this May 22, 2012 file photo taken in Atlanta. Willie A. Watkins funeral home in Atlanta confirmed Saturday July 21, 2012 it is handling funeral arrangements for 11-year-old Kirk Glover. He was the son of Usher's ex-wife Tameka Foster. The boy was run over July 6 by a personal watercraft on Lake Lanier, according to the Georgia Department of Natural Resources. (AP Photo/David Goldman, File)
Entertainment

After Usher’s son, Usher Raymond V, was sent to the hospital after he had a serious accident on Monday, Usher’s ex-wife Tameka Brown filed for emergency custody on Wednesday.

Usher Raymond V is expected to recover from the pool accident, but Foster wants to revisit the custody agreement and get custody as soon as possible.

“(The) children are at risk while in the care of third-party caregivers,” Foster’s legal motion indicated, according to Today. “(W)hile (Usher) travels around the world for his work-related obligations.”

Usher was not around when the accident happened; instead, Usher Raymond V was playing with his aunt.

The child was playing with his aunt at a pool when he saw a toy in the pool’s drain. The child reached for it and got his hand stuck.

The aunt dove in and tried to rescue him but was unsuccessful. Two men working at the house then came out and got the boy out.