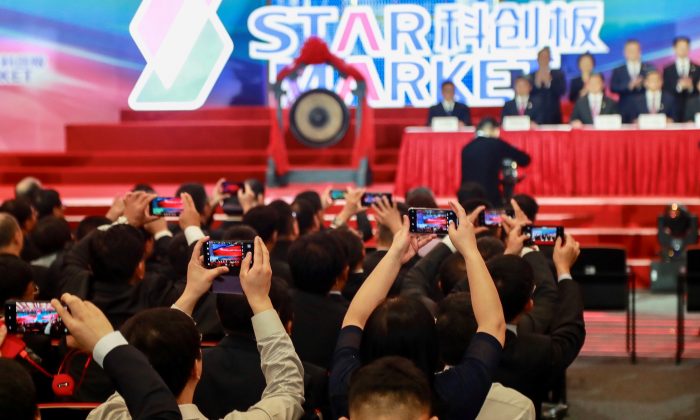 Taking the Temperature on Chinese Equities

China last week debuted another stock exchange—the STAR Board—in a bid to drum up enthusiasm in its equity markets.

STAR’s debut was a boon for the 25 companies that began trading at the exchange last week. The share prices of all 25 companies soared at their opening on July 22, with average gains of 140 percent at the end of the first day of trading. One of the most high-profile listings on STAR is China Railway Signal & Communication Corp., which also lists shares on the Hong Kong Stock Exchange.

“Gains were much stronger than expected, either due to unreasonable IPO pricing or speculative trading,” Zhu Junchun, an analyst at Lianxun Securities in Shanghai, told Bloomberg on July 22.

But investors lost money as quickly as they made it.

On the second day of trading—July 23—all but four of the 25 companies’ shares fell, wiping out roughly 9 percent of their value. The state-run China Railway Signal and Communication was the biggest loser on day two: Its stock fell by 18.4 percent.

A Different Breed of Stock Market

Beijing hopes STAR will convince the country’s biggest technology firms to list domestically. It’s a little known fact that none of China’s largest, most influential technology firms are listed in China itself and that Chinese investors can’t easily own shares in them. Tencent Holdings and Meituan-Dianping are both listed in Hong Kong. Baidu, JD.com, and Alibaba Group are all listed on Nasdaq in New York.

China’s domestic A-shares are dominated by stodgy state-owned banks, oil companies, and industrial firms. Meanwhile, China is home to 94 of the world’s 326 unicorns—or startups with valuations of greater than $1 billion—yet they have very little chance of doing an IPO in China due to stringent listing rules for domestic markets.

STAR is a different type of stock exchange for China. Unlike most other Chinese exchanges, stock movements are uncapped, and companies that haven’t recorded profits can be listed on STAR. In addition, STAR will support shares with unequal voting rights—a hallmark of startups looking to preserve voting control for founders.

In other words, STAR will become the most unfettered, speculative market in China. The country’s stock markets already experience frothy valuations and extreme volatility despite tightly regulated exchanges.

There are some requirements to trade STAR stocks. Investors must have 500,000 yuan (approximately $72,000) to trade on STAR. The Shanghai Stock Exchange also plans to create an index to track the companies on STAR.

Currently, STAR-listed stocks aren’t eligible for northbound trading through the Hong Kong-Shanghai Stock Connect program by Hong Kong residents until further “operational and technical preparations are completed,” according to a research note by Morgan Stanley.

In China, Bigger Is Better

Despite the initial frenzy, investors should exercise extreme caution speculating on IPOs of unproven companies listed on STAR.

First, we can’t forget that China’s first attempt at creating a technology-supportive exchange failed miserably. The 2009-vintage ChiNext market never took off, due to lack of liquidity and, if we’re to be honest, a lack of good companies to invest in.

Bloomberg data showed that in 2019, the 50 biggest companies on the Shanghai and Shenzhen exchanges on average doubled their performance relative to the Shanghai Composite Index—which takes all securities into consideration.

This makes sense in relative value terms due to industry consolidation, given China’s weakening economic growth and the ongoing trade war with the United States. Reforms aimed at cutting supply-side capacity and increasing productivity also support the “bigger is better” theory. Structurally, the inclusion of A-shares by global index compilers MSCI and FTSE Russell will likely funnel foreign capital into the biggest players by market capitalization.

Sentiment in Chinese equities is mixed today, and some leading market strategists are advocating for caution. Chinese equity valuations seem rich at the moment, despite hype generated by STAR.

“We do not believe the near-term enthusiasm for STAR trading can meaningfully boost the A-share market overall from the perspective of both sentiment and fundamentals,” Morgan Stanley Asia equity strategist Laura Wang wrote in a research note to clients on July 26.

Pan Yue, CEO and chief investment officer of Jinghong Investment Co., believes the recent high stock turnover rate is an indication of smart money leaving the market. “Of [investment managers’] allotment of their IPO subscription, they sold almost all of them,” Pan told Bloomberg TV on July 23, referring to the unusually high turnover rate seen after STAR’s debut. “And it is confirmed by all the public fund managers, they have sold out a lot.”

“I think at this point I would be more cautious,” Pan said. “Most of the tech stocks have reached their peaks.”

On a more macro level, Japanese brokerage house Nomura Securities believes China and Hong Kong could be due for a financial crisis, according to a Forbes report.

Nomura’s proprietary Cassandra risk-assessment program tracks 60 early-warning indicators for financial risk. Hong Kong has 49 red signals, while China is the second-highest with 25, the report said. Nomura’s models have accurately predicted two-thirds of the past 50 financial crises in a sample of emerging and advanced economies.