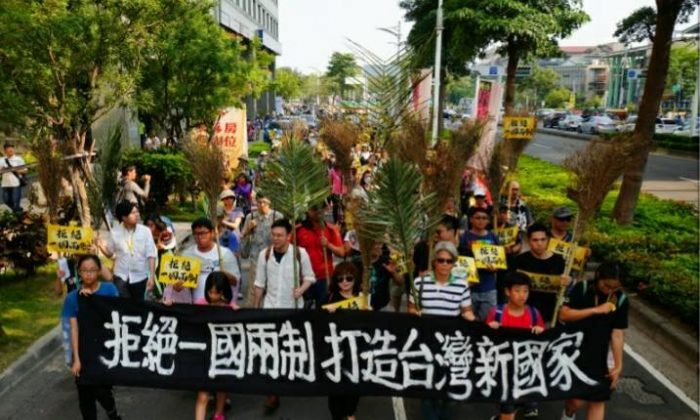 Protesters raise a banner with the words "No to 'One Country, Two Systems' and Built a New Taiwan Country" in a parade that took place in Kaohsiung, Taiwan, on April 7, 2019. (NTD)
Chinese Regime

Taiwanese Protest Against Beijing’s Proposed Takeover of Taiwan Under ‘One Country, Two Systems’

TAIPEI, Taiwan—About 3,000 people took to the streets of Kaohsiung in southern Taiwan on April 7 in protest of Beijing’s proposal to rule the island under the “one country, two systems” model.

The model is currently used in Hong Kong, since the city’s sovereignty was handed over from Britain to China in 1997, which was intended to preserve its autonomy and freedoms while under mainland Chinese rule. However, the city has seen the encroaching influence of Beijing impact local politics, education, and freedom of the press in recent years.

Chinese leader Xi Jinping has repeatedly suggested this model as a way to bring Taiwan under the reign of Beijing, including most recently in a January 2019 speech before Chinese Communist Party members.

Relations between Taiwan and China are fraught, as the Chinese regime considers Taiwan a renegade province under its sovereignty, despite the fact that the latter is a de facto independent country with its own elected officials, constitution, military, and currency.

Xi’s proposal angered many in Taiwan. In response to Xi’s comments, Taiwan President Tsai Ing-wen had called on international support against such Chinese aggression.

“We are here to express our rejection of the ‘one country, two systems,’ as well as any peace proposal [with China],” said Lai Chung-chiang in an interview with the Asia-Pacific branch of New York-based broadcaster NTD. He participated in the protest and is also the founder of the Economic Democracy Union, a local nonprofit.

A peace deal with China has recently been bandied about by Taiwan’s opposition party, the Kuomintang (KMT), which favors more Beijing-friendly policies. KMT chairman Wu Den-yih said in February that the party could sign some sort of peace deal with China if one of its presidential candidates won the presidential election in Taiwan in 2020, according to Taiwanese media. According to the KMT, it would ensure the preservation of Taiwan sovereignty, but the party made no mention of China’s military aggression. Beijing routinely threatens military invasion with rhetoric and incursions such as the two Chinese fighter jets that intentionally crossed into Taiwan’s median line on March 31.

Many Taiwanese have since voiced opposition to the KMT’s suggestion of a peace deal, according to Taiwanese media, with some rights groups pointing to how the regions of Tibet and Xinjiang lost their freedoms and were subjected to Beijing’s oppression after its governments engaged in peace talks with the Chinese Communist Party.

The protest coincided with a rally where some took to the stage to voice their criticisms of China, including Shen Pao-yang, assistant professor at the Graduate School of Criminology at Taiwan’s National Taipei University.

Shen spoke about Beijing’s infiltration of Taiwanese society and its efforts to pressure Taiwan’s allies into switching diplomatic recognition to Beijing.

Since Tsai came to office in 2016, Taiwan has lost five diplomatic allies, El Salvador, Burkina Faso, the Dominican Republic, Panama, and Sao Tome and Principe. Taiwanese authorities have accused Beijing of deploying “dollar diplomacy”: providing investments and loans to Taiwanese allies so they would drop their recognition of Taiwan.

At the rally, Edith Cheung, who immigrated to Taiwan from Hong Kong in 2018, discussed how Hong Kong citizens have complained of more economic woes after the region returned to Chinese sovereignty in 1997, according to Taiwanese media.

Wealthy mainland Chinese have been buying up Hong Kong’s real estate properties, driving up prices to the point that normal Hong Kong residents can no longer afford to buy them, according to Cheung. She added that the real estate problem has been compounded by the failure of the Hong Kong government to build enough public housing to support people’s needs.

Li Jiabao, a mainland Chinese exchange student in Taiwan, recently made headlines after he publicly criticized the Chinese regime and expressed his fear that his parents may be under house arrest in China—as he has not heard from them in a long time.

Critics in Taiwan say they fear Han may have implicitly agreed to Beijing’s political demands in order to pull off the deals.

A previous version of the article misstated the year of Xi Jinping’s speech on Taiwan’s sovereignty. The Epoch Times regrets the error.