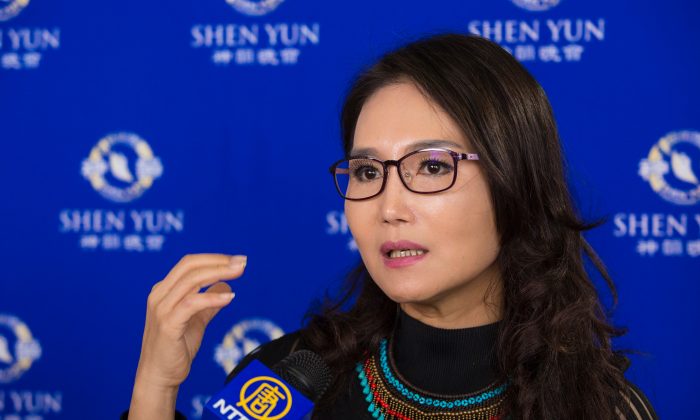 TAINAN, Taiwan—It is common for orchestras to play tunes and music and communicate with an audience on the surface level of the music. That was not the case at Cheng-Kung Auditorium on Sept. 24, when Hsu Yueh-tung was delighted to find the music by Shen Yun Symphony Orchestra spoke to her in a very deep way.

Ms. Hsu recounted how she was tired after a long day of work; however, after seeing the orchestra, she said, “I felt all of a sudden that my body was refreshed. My vision, my hearing, and even the cells in my body, have all been invigorated.”

As the president of a jazz band and CEO of a local music and culture company, Hsu said she was no stranger to classical Chinese music or to Western classics like “The Hungarian Dance.” Shen Yun’s music, however, made her feel that she had become part of “Shen Yun.”

Shen Yun, its name meaning the beauty of divine beings dancing, is a New York-based company with a mission to revive 5,000 years of traditional Chinese culture. The symphony orchestra is one-of-a-kind, given its identity as the only musical company capable of achieving seamless harmony between a Western symphony orchestra and classical Chinese instruments.

“The union between East and West is amazing,” said Ms. Hsu, adding “The fact that the erhu can work with the trumpet and it can also work with violin is very, very special to me.”

The erhu, also known as the Chinese violin, goes back over 4,000 years, and according to Shen Yun’s website, the instrument, though having only two strings, is capable of conveying a wide range of emotions.

Ms. Hsu said she couldn’t close her eyes during the performance because of the richness behind the music. And the best example to illustrate her point was “Delicate Dance,” a musical piece that was led by three erhu soloists.

It was like an unexpected moment of compassion and everything felt great.
— Hsu Yueh-tung

“My body becomes soft when the music is soft,” explained Ms. Hsu. And during the brief seconds just before the music reached an emotional peak, she said, “There was a brief moment of tranquility, and it allowed me to settle down.”

“It was like an unexpected moment of compassion and everything felt great.”

In an extended interview on Shen Yun’s website, Milen Nachev, the conductor of the performance, put into words what the deeper meaning was that the orchestra tried to convey to the audience.

“It’s like a secret code inside the musical text that we bring out to the audience. It’s not necessary for them to understand the secret code, but the effect and the resonance is there,” Mr. Nachev said.

At another moment during the performance, Ms. Hsu added she felt a similar resonance at a deep level. The prelude of a musical piece, which was dominated by the sounds of clarinets, gave her the divine feeling of “being among the angels.”

Conductor as the Soul of the Orchestra

Ms. Hsu said the soul behind every orchestra lies in the conductor, and it was no different with Shen Yun Symphony Orchestra. Nachev brought down the house with his skill.

“He has the demeanor of a king,” said Ms. Hsu, adding that Nachev had a knack of knowing when to be powerful, and when to be soft. Additionally, she noticed that Nachev and the musicians had great chemistry.

Also taking the stage in the performance were vocal soloists, and according to Ms. Hsu, they were equally impressive.

“They were beaming with confidence,” said Ms. Hsu, who added that she had learned from them how one should be honored, when taking the stage.

According to Shen Yun’s website, the soloists are trying to bring back a lost singing technique, the true bel canto method, in singing songs with inspirational messages.

The soloists weren’t just singing, she said, but they were singing “the stories of their songs” as if they were “part of the stories.”

“This is a cultural exchange between the East and West. I have learned so much and so would other musicians [if they were to come].”