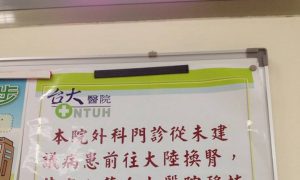 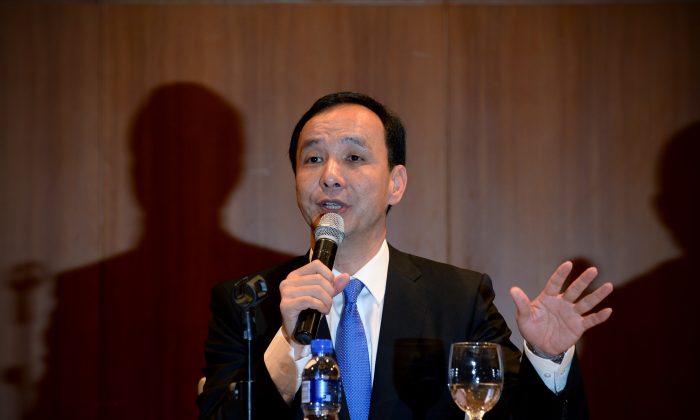 Eric Chu, chairman of Taiwan's ruling Kuomintang (KMT) party speaks during a press conference at a hotel in Beijing on May 4. The Chinese regime's leaders told Chu that a "One China" policy would be required for any business deals. (WANG ZHAO/AFP/Getty Images)
China

The leader of Taiwan’s nationalist party is showing interest in abandoning sovereignty in exchange for business opportunities, say critics. Nationalist Chairman Eric Chu met with Chinese Communist Party head Xi Jinping on Monday where a “One China” policy was a requirement for any deal.

Xi stressed that both parties would need to use the “1992 consensus” as a precursor to any deals. Under the agreement Taiwan is required to regard itself as a part of China, but it’s supposed to allow Taiwan and the Chinese regime to interpret what the “one China” is and who has the right to govern it.

Chu caused some controversy, however, by allegedly saying the “two sides belong to one China.” For some, the statement sounded a bit too similar to the Chinese regime’s “one country, two systems” policy for governing Hong Kong.

The director of Taiwan’s Democratic Progressive Party, Chao Tien-lin, said Chu’s remarks are a step backward for the sovereignty of Taiwan, according to a report from Taiwanese television network SETN.

He said Chu’s comments limit Taiwan’s participation in international affairs to the framework of the 1992 consensus “and one China policy,” which in turn limits Taiwan’s role in the international community.

“Our national sovereignty has just taken a step backward with Chu’s support for China’s stance,” said Chao, noting that the statements suggest that both Taiwan and the mainland belong to the Chinese regime.

There were large-scale protests in Hong Kong calling for free elections, after the Chinese regime released a white paper on June 10, 2014, stating “China’s central government has comprehensive jurisdiction over all local administrative regions, including the Hong Kong Special Administrative Region.” The White Paper was understood by Hong Kong democrats to nullify the special protection heretofore given to Hong Kong’s governing institutions, including an independent judiciary and civil rights.

During Chu’s meeting with Xi, the example of Hong Kong seemed to be forgotten.

On May 3, Chu shared his hope that Taiwan could have a larger role in the international community, based on what the South China Morning Post called “a crucial cross-strait consensus.”

There are factions in Taiwan that want the island state to join several initiatives of the Chinese regime in the mainland. Among them are the Asian Infrastructure Investment Bank (AIIB) and the “One Belt, One Road” economic initiative.

Those opposed to the initiative, particularly those with the Democratic Progressive Party, according to South China Morning Post, say the agreements would only benefit big businesses in Taiwan.

There is an ongoing concern in Taiwan that growing ties with the Chinese Communist Party could eventually lead to communist rule in Taiwan, and with it the end of free elections and the import of the Chinese regime’s oppressive policies. The Chinese regime has similarly pushed for control of Taiwan, under its policy for “peaceful reunification.”