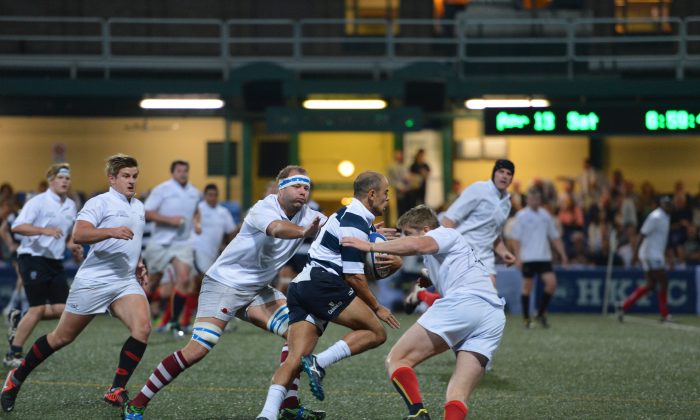 Escaping the Challengers’ clutches ... James Richards (HKFC) of the Taipans breaks free from these tackles in his own half to make a superb run for the line nine minutes into the second half to cut the deficit to 12-15 and, with the conversion by Rob McDermott, (HKFC) putting the Taipans within one point of the Challengers. (Bill Cox/The Epoch Times)
International

Taipan Challenge Teetered on the Brink

Coming from behind after the first half, Taipans held on to beat the Challengers by three points in last Saturday’s (April 13) Taipan Challenge at the Hong Kong Football Club.

In a game of two-halves, the half time score was 0-10 to the Challengers. This was a forward’s battle with frequent referee interruptions. In contrast, the second half was one of fast flowing and fast running rugby that was a delight to watch.

A converted Lloyd Jones (HKFC) try early in the second half by Rob McDermott (HKFC) set the Taipans on the score sheet. But the Challengers hit back with a try by Adrian Griffiths (HK Scottish) near the corner flag just three minutes later to make it 7-15.

A further try by Kenzo Pannell, converted by McDermott, pushed the Taipans’ lead to 28-15 with only eight minutes of the match remaining.

The balance of the match then changed and the Challengers dominated the remaining time, putting in a tremendous final burst. First with a try by their big No. 4 Craig Hammond (HK Scottish) three minutes from time, closing the gap to 28-20—but the conversion was missed. Another try for the Challenges one minute from time took them to within three points of the Taipans. And even in injury time they were pushing for the win, but time ran out otherwise they might well have forced the victory.

The Taipans survived a thrilling second half win 28-25 to claim the Mansergh trophy.

Arguably the difference was McDermott with four conversions. He had sent the ball over the cross bar following each try that Taipans had made in an impressive display with the boot. Had Challengers been as deadly by foot the scoreline would have looked very different.

Started in 1951, the Taipan Challenge has a history of over 60 years. It was introduced to involve big business into the game of Rugby.

Each year a leading business figure is invited to lead the challenge and select a team of top performing players, mainly from across the Hong Kong clubs. The Challenger, which until handover in 1997, was led by the Commander of the British Forces in Hong Kong, now, a leading HK Rugby figure is selected to lead another team of Hong Kong players.

The 2013 Taipan, Andrew Weir is Regional Senior Partner of KPMG, a long time supporter of Hong Kong Rugby. Hong Kong born David Lewis, with a very distinguished track record in Rugby Football having been capped for Hong Kong a record 55 times, was the Challenger.