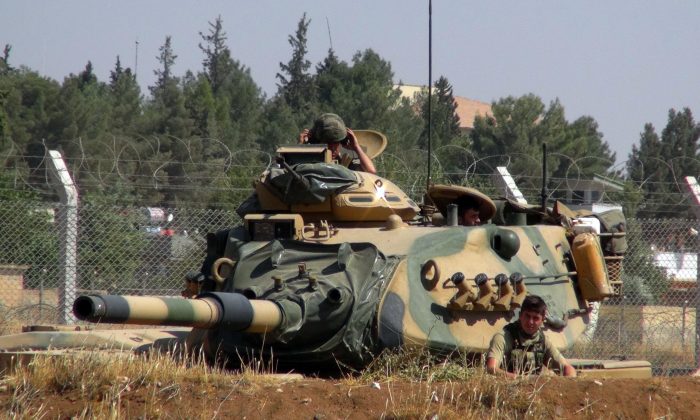 Syrian Troops Advance Near Aleppo in Attempt to Impose Siege

The push came a month after insurgents captured several military academies south of Aleppo and opened a corridor into rebel-held parts of Syria’s largest city and onetime commercial center. Since then, government forces and their allies have been trying to recapture the area.

Amid Struggle for Syria Deal, Obama and Putin to Meet Monday

State news agency SANA quoted an unnamed military official as saying that troops have captured the Armament Academy and are “continuing their advance in the area to impose almost a total siege on the gunmen in Aleppo.”

The Britain-based Syrian Observatory for Human Rights confirmed that government troops captured the academy, adding that insurgents have launched a counteroffensive.

Al-Manar TV, which is run by Lebanon’s Hezbollah group, said troops are now pushing toward the nearby Artillery Academy. Hezbollah has sent thousands of fighters to Syria to bolster President Bashar Assad’s forces.

To the north of Aleppo, fighting between Turkish-backed rebels and the Islamic State group intensified Sunday near the rebel-held town of al-Rai, near the Turkish border.

Turkey sent tanks into al-Rai on Saturday in what it said was a “new phase” in an operation to drive IS away from the border. Al-Rai is 55 kilometers (34 miles) west of Jarablus, a border town seized by Turkey-backed Syrian rebels last week. The Turkey-backed forces are now advancing toward each other from both towns, hoping to close off the last stretch of the Syrian border ruled by the extremists.

The Observatory said IS still controls four border villages, adding that once they are taken it will cut the extremist group’s last “link with the outside world.”

The LCC said Turkish-backed Free Syrian Army rebels captured the village of Tweiran, to the south of al-Rai, from IS on Sunday. Turkey’s state-run Anadolu news agency said 19 Syrian rebels wounded in clashes with IS since Saturday have been hospitalized in Turkey.

“We are there to protect our borders, ensure the safety of our citizens’ lives and property, and to protect the territorial integrity of Syria,” Yildirim said during a visit to the southeastern city of Diyarbakir.

“We will never allow an artificial state in Syria’s north,” he said, apparently referring to U.S.-backed Kurdish forces, who have taken a large swath of territory from IS along the border. Turkey views the Kurds as a threat and the Turkey-backed forces have clashed with them outside Jarablus.

In a press statement late Saturday, Turkey’s military said the FSA took control of 10 villages from IS, adding that the Turkish army struck 20 IS targets. Since the Turkish operation began on Aug. 24, the army says it has hit 300 targets with 1,306 rounds.

SANA later reported that Assad received a British delegation on Sunday including members of the House of Commons and the House of Lords. SANA said they discussed Syria’s war and ways of fighting terrorism.