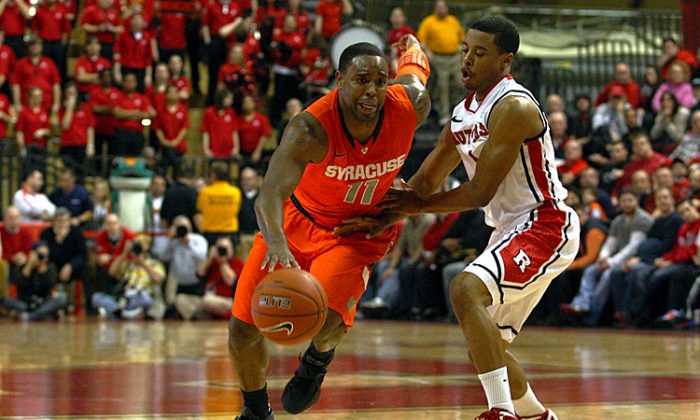 Syracuse senior guard Scoop Jardine scored 17 points to lead the Orange (27-1) to a 74–64 win Sunday at Rutgers (12-15). Included in that total were five crucial points that turned a 64–62 nail-biter with just under three minutes remaining to a more-comfortable 69–62 lead with just over a minute remaining.

The win marks the seventh straight for Syracuse.

Forward C.J. Fair scored a team-high 21 points for the Orange, and hit all eight of his free throw attempts. Along with center Fab Melo’s six-for-eight free throw shooting, Syracuse as a team was 21/31 overall at the line while Rutgers attempted just 11, hitting nine of them.

Rutgers sophomore forward Gilvydas Biruta led the team with 21 points and 7 rebounds. Rutgers as a whole though struggled against the defense of Syracuse, hitting just three of 18 three-pointers.