Why Would a Russian Submarine Be Lurking in Waters Off Sweden?
0
Share Now
TelegramFacebookTweetEmailTellMeWeReddit
Copy Link 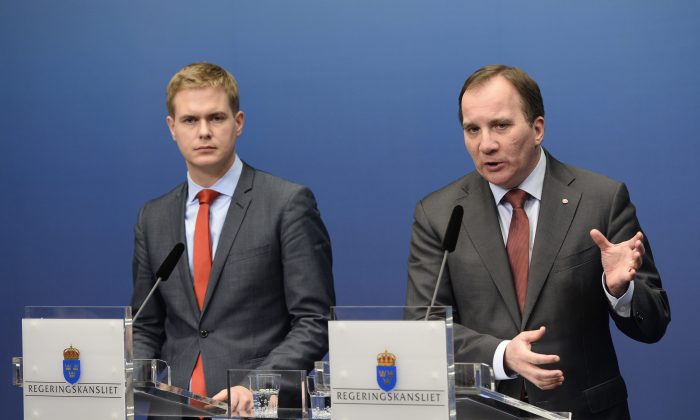 Sweden's Prime Minister Stefan Lofven (R), of the Social Democrats, and Minister of Education Gustav Fridolin (L), of the Green Party, give a press conference at the government chancellery in Stockholm, Sweden, on Wednesday, Dec. 3, 2014, where Lofven announced fresh elections after his coalition government failed to get its budget through parliament. (AP Photo/TT News Agency/Pontus Lundahl)
Europe

Swedish Premier to Call for New Vote on March 22

Social Democrat Stefan Lofven, who took office just over two months ago, saw his budget dismissed as the far-right Sweden Democrats Party sided with the center-right opposition. 182 lawmakers voted against the budget in Parliament Wednesday, while only 153 voted in favor.

Lofven indicated he would remain in office until new elections were held, but voiced disappointment after prolonged talks with various parties, including the center-right opposition, broke down late Tuesday.

“We are willing to cooperate with several parties,” he told reporters, but emphasized: “There is one party though that we will not consider cooperating with and that is the Sweden Democrats.”

“I cannot let the Sweden Democrats dictate the conditions,” he said after the Parliament vote, describing the anti-immigration group as “irresponsible.”

The Sweden Democrats’ opposition to the budget proposal was considered a major political breakthrough for the group that became the country’s third-largest party in the 349-seat Parliament two months ago.

The party stands alone in Swedish politics in criticizing the country’s liberal immigration laws. Despite efforts to soften its image, all other parties have refused to work with the party that has right-wing extremist roots.

The party has said it would vote against any other major party or group that continues to support Sweden’s liberal immigration laws.

Lofven became prime minister as head of a coalition with the Greens after the September elections, promising to reverse many reforms by the previous center-right government.

From the start, his minority government — which holds 138 seats in parliament — was expected to struggle to push its agenda through. With the support of the former Communist Left Party, which stands outside the Cabinet, it controls 159 seats.

The center-right opposition, made up of four parties, has 141 seats, but the extra votes — from the 49 Sweden Democrats — were enough to topple the ruling coalition.

Lofven has to wait until at least Dec. 29 to officially call the new election, according to Sweden’s Constitution.

From The Associated Press. AP reporter Matti Huuhtanen in Helsinki contributed to this report.