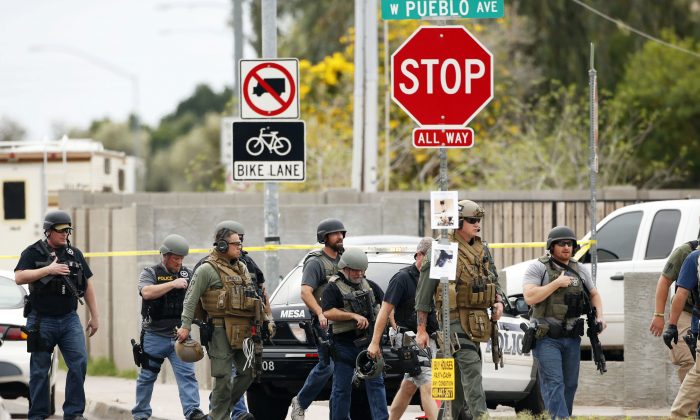 A SWAT team searches for a gunman in Mesa, Ariz., on March 18. A gunman in a rampage that included a motel shooting, a carjacking and a home invasion ended with his arrest at a nearby apartment in suburban Phoenix. (AP Photo/The Arizona Republic, Rob Schumacher)
Crime and Incidents

SWAT Shot Gunman After Running From Police Into Restaurant

DOWNEY, Calif.—A SWAT team killed a gunman Thursday night after he led police on a long car chase then ran into a crowded restaurant and seized at least four hostages, authorities said.

The sheriff’s team entered the restaurant from the front and back and shot the man, who was declared dead at the scene, Los Angeles County sheriff’s Lt. Eddie Hernandez said. The man had a gun, but did not fire at the SWAT team, Hernandez said.

At least four people were being held against their will inside Chris’ and Pitt’s barbecue restaurant in Downey, Hernandez said.

About an hour before the restaurant was raided, dozens of people including children, customers and workers, could be seen walking cautiously but quickly out after the man ran inside. He had fired at least two shots into the air before running in.

“We were eating dinner and I just heard a man screaming ‘Get down! Get down!'” customer Stella Aguilera, out of breath and near tears, told KCAL-TV. “My daughter was in the bathroom with my little granddaughter, 2 years old. And we all got down I grabbed my baby grandson, and I saw the guy with the gun. And he was asking, ‘I need some medication, just anybody give me medicine.'”

Aguilera said the man then shouted that all women and children could leave, and she and her grandchildren ran out.

The suspect’s name has not been released.

The chase began when a sheriff’s helicopter detected a signal from a stolen Honda Civic in the Whittier area, sheriff’s Cmdr. Mike Parker said. The helicopter crew then spotted the man stealing another car at gunpoint.

Sheriff’s and California Highway Patrol cars chased the man at high speeds on side streets and Interstate 710 through several communities east of Los Angeles, Parker said. The suspect was involved in at least one collision.

Eventually a CHP SUV forced the man to stop using a so-called PIT maneuver. After a few moments the man jumped out of the car and ran toward the restaurant.

At least one person could be seen in handcuffs outside the restaurant during the ordeal, but Parker said they were only cuffed out of caution before deputies could be sure who the suspect was.

“This was a very dangerous night,” Parker said, “for law enforcement and the public.”