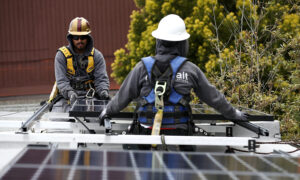 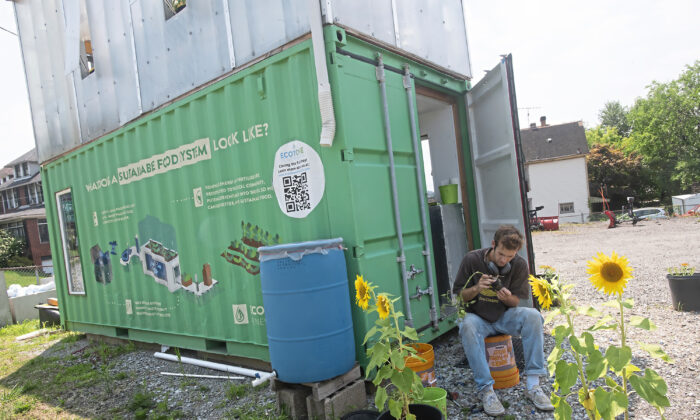 Nate McDowell from Squirrel Hill, an intern with Ecotone Renewables replants tomatoes grown at the "Seahorse," in Swissvale, Pa., on July 23, 2021. (Pam Panchak/Pittsburgh Post-Gazette/TNS)
US News

By Lauren Rosenblatt
From Pittsburgh Post-Gazette

PITTSBURGH—Ecotone Renewables, a startup by students and graduates of Carnegie Mellon University and the University of Pittsburgh, wants to change the way the world thinks about food waste—and it wants to use a seahorse to do so.

It’s not talking about the underwater critter but it is paying homage both to a horse’s stomach and the ocean.

Founded about five years ago, the startup wants to “close the food loop” by turning food waste into something that isn’t wasteful.

Its system, dubbed the “Seahorse,” uses recycled rain water (hence the sea) and works in the same way a horse’s stomach would when digesting all that hay (hence the horse.) Using a technical process called anaerobic digestion, it takes the “digested” food waste and turns it into something more useful, specifically fertilizer and energy that can then be reused to create more food.

The pandemic upended how we eat and where we eat. Those changes are still shaking out.

“We’re diverting food waste that would otherwise go into landfill and we’re actually turning that food waste into a liquid fertilizer as well as renewable energy,” said CEO Dylan Lew.

“We’re kind of trying to close that cycle of instead of having food waste just rot in landfills and contributing to global greenhouse gas emissions, we’re trying to use that, recapture both the nutrients that’s otherwise usually wasted as well as some possible revenue streams.”

About 108 billion pounds of food is wasted every year in the United States, according to hunger-relief organization Feeding America. That amounts to more than $161 billion worth of food.

Those many pounds of food are also going to waste at a time when lines to get a meal from food banks around the country are hours long. Due to the COVID-19 pandemic, the Pittsburgh region saw a 42 percent increase in food insecurity, according to a March 2021 report from the Greater Pittsburgh Community Food Bank.

By partnering with groups like the Greater Pittsburgh Food Bank and 412 Food Rescue, Ecotone says they’re coming at the food waste problem from both angles. Ecotone is working to find ways to reuse the food after it’s gone to waste. 412 Food Rescue and the food bank are working to redistribute it to people who need it before it goes bad.

“There’s kind of this pyramid of tackling food waste,” Lew said. “The first thing to do is stop it at the source… trying to avoid food waste in the first place by redistributing it, by getting it to the people that need it and away from the people that would otherwise waste it.

“We’re that step right below to basically catch anything that they can’t redistribute.”

From the outside, the Seahorse looks like a large green trailer. The inside is filled with a network of pipes and tanks that store and move the food waste and the fertilizer that comes from it.

Think of the Seahorse as acting like a stomach, Lew said. It uses anaerobic digestion, or the process of microorganisms breaking down organic material without oxygen being present.

When a human eats food, a bunch of bacteria and microbes in the stomach work to break it down. Later on, out comes “some gas and…other things,” as Ecotone Renewables describes it in a blog post on their website.

When food waste goes into the Seahorse, a bunch of bacteria and microbes break it down. Then, out comes gas and fertilizer.

“What is coming out of this system are raw nutrients that the plants will use to grow big and strong,” said Kyle Wyche, the chief operating officer. “A lot of the times, farmers will have powdered fertilizer that they add water to and use that for their crops to grow. Ours is essentially just a strong nutrient rich liquid that’s coming out of an industrial stomach.”

The process is meant to reduce greenhouse gas emissions coming from food waste.

Decomposition of food waste produces 8.2 percent of global greenhouse gas emissions, according to Ecotone. The U.S. Department of Agriculture estimated landfills are the third-largest source of human-related methane emissions, accounting for about 14 percent of those emissions in 2017.

In the Seahorse system, the methane, carbon dioxide, and hydrogen that come out of that industrial stomach are turned into electricity, which Ecotone Renewables plans to use to power a greenhouse on top of its system.

There, the team is growing tomatoes, hot peppers, and microgreens using hydroponics, a process of growing plants with added nutrients but no soil.

Most of the Seahorse systems won’t come with a greenhouse attached, Lew said, because it adds on time, energy and expenses.

Ecotone plans to offer different operating models for customers to decide how to use the fertilizer and energy that come from their food waste. On one end of the model, customers can choose to use the products on site. On the other, Ecotone will take care of it all, organizing sales for the customer.

The Seahorse anaerobic digester can take in 385 pounds of food waste a week. In that time frame, it produces 50 gallons of fertilizer.

Start on a Diet of Leafy Greens…

Using a process called aquaponics, the project team built a “21st century food system” that raised tilapia and grew basil inside a shipping container that’s similar to the one Ecotone Renewables has refashioned.

It combined hydroponics and aquaculture, the farming of fish, crustaceans and plants in water, to create a “closed-loop system” where the fish waste fed the plants, which in turn filtered the water for the fish.

The Aquaponics Project system was first built near the Gateway T Station Downtown before heading next to a community garden in East Liberty. Ecotone Renewables later moved the project to Swissvale in March 2021.

So far, the Swissvale Seahorse is the only one on the market but Lew and Lyche said interest is growing. When the first system launched in East Liberty, a handful of people came to the unveiling. When it moved its system to Swissvale earlier this year, about 100 people attended.

The startup is fully self-funded, the executives said, and has raised about $70,000 from different competitions.

To bring in revenue, it is selling the fertilizer produced from its operating Seahorse. So far, it has sold about 300 gallons of fertilizer and donated more than 500. A gallon of its “soil sauce” goes for $30.

The company, which has three full-time employees and eight interns, is participating in the CleanTech Open, an accelerator to provide resources needed to launch and grow businesses focused on “clean tech.” That tech could focus on anything from energy generation to green building to transportation.

Ecotone Renewables sees itself as a way to bring this type of food waste tech to mid-sized markets. For smaller scale operations, aquaponics systems are already available, and there are big, industrial size digesters already operating on the larger market. The Swissvale startup wants to market itself to mid-sized customers like restaurants, grocery stores and apartment buildings.

It takes about three to four weeks to build a system, Lew said. But, just like a baby’s stomach, it takes a while to get up and running. Start it out on a diet of leafy greens and carbs before adding in meat, dairy and fish.