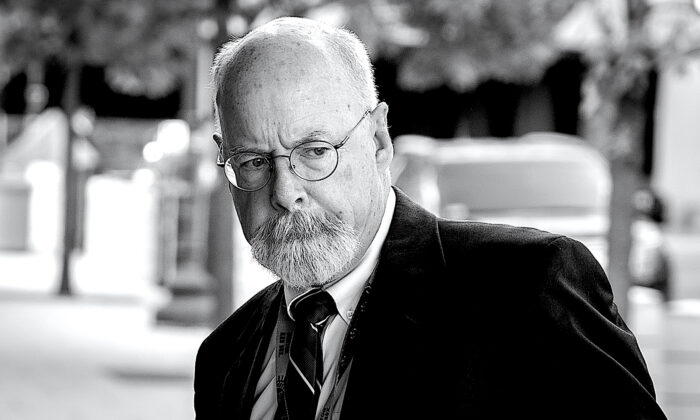 Special Counsel John Durham arrives at federal court in Washington on May 18, 2022. (Teng Chen for The Epoch Times)
Viewpoints

We can join the world now. Au revoir, American Exceptionalism. We are China. We are Putin’s Russia. We are the European Union, drifting ever more swiftly into Davos globalism and the Great Reset. We are the Ayatollah’s Iran. We are Orwell’s “Animal Farm” and then some.

Most of all, goodbye to the rule of law. Was it ever there? I seem to have vague memories.

The jurors in John Durham’s trial of attorney Michael Sussmann—which resulted in the Clinton campaign lawyer’s acquittal—will be remembered, by those allowed to remember, if any, as the moment our already decaying justice system went completely south.

The D.C. jurors, revealed in the voir dire to have been completely biased in the first place, demonstrated that the English language itself—and the evidence available therein—was of no interest to them. They not only nullified a possible verdict, but they also nullified English by ignoring the email that Sussmann wrote then FBI attorney (now Twitter stalwart) James Baker the night before their meeting.

“I have something time-sensitive (and sensitive) I need to discuss. I’m coming on my own—not on behalf of a client or company—want to help the Bureau.”

Baker testified that Sussmann told him the same thing in person, yet billing records, and much subsequent activity, clearly show that Sussmann was lying. He was working for Hillary Clinton via the Perkins Coie law firm. Several years of ugly U.S. history flowed from that.

Did the jury care? Evidently not. Their decision was close to immediate.

The jurors’ justification, assuming they bothered to use it, of the questionable “materiality” of Sussmann’s lies has some small justification, but only up to a point. Yes, the FBI’s feelings for Donald Trump were already somewhere between repugnance and revulsion—as evidenced by many emails we have seen and probably even more that we haven’t—but if we are to believe that makes Sussmann’s lie irrelevant, we are also to believe there wasn’t a widespread conspiracy in which he was very willing participant against the candidate and then president, an entente cordiale, as they say.

And that entente cordiale was among the most despicable acts ever performed by Americans against their fellow citizens.

This would make Sussmann a true believer in “the ends justify the means.” What a disgrace to the American legal profession he is. More despicable still, he will undoubtedly be rewarded for his lies.

It was undoubtedly true that Durham had hoped Sussmann would fear incarceration and turn state’s evidence, opening up a whole host of possibilities for further prosecutions. The special counsel knew he would be up against a D.C. jury, but my guess is he hadn’t truly realized how bad things had become, how tainted that jury pool really was.

This is yet more evidence of mass formation psychosis. The citizens of our nation’s capital have been brainwashed, by the legacy media and the reactionary zeitgeist of the world in which they live.

This must end for our children.