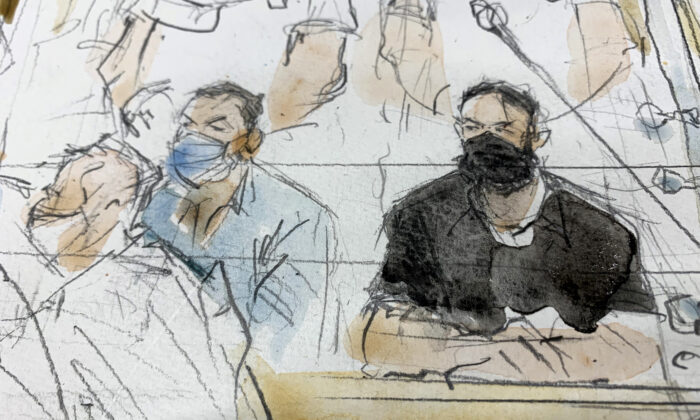 The prime suspect in the Paris terrorist attacks that killed 130 people nearly six years ago described himself on Sept. 8 as a “fighter of the Islamic State” while appearing on trial over the worst terror attack in France’s history.

Salah Abdeslam, a 31-year-old man with French citizenship but who grew up in Belgium, is one of 20 suspects on trial for their involvement in the November 2015 gun-and-bomb attacks on six restaurants and bars, the Bataclan concert hall, and a sports stadium where then-President Francois Hollande was attending a game.

Abdeslam also is believed to be connected to the same ISIS network that went on to strike Brussels, the capital of Belgium, in 2016—killing another 32 people.

“First of all, I want to testify that there is no God but Allah and Muhammad is his servant,” Abdeslam said on trial after he was asked to identify himself. Asked about his profession, the French Moroccan told the court defiantly: “I gave up my job to become a fighter of the Islamic State.”

He’s believed to be the lone survivor of the 2015 terror attacks that also injured more than 350 people, when nine gunmen and suicide bombers struck within minutes of each other at different locations across Paris.

Abdeslam is the only suspect charged with murder; the others on trial are accused of helping to provide guns and cars or playing a role in organizing the attacks.

The 20 defendants include 11 who are already in jail pending trial. Six will be tried in absentia—most of them are believed to be dead. Most face life imprisonment if convicted.

On Nov. 14, 2015, the day after the bombings, the ISIS terrorist group claimed responsibility, saying it urged followers of the radical Islamic group to attack France in retaliation for “insulting their Prophet” and launching airstrikes against the terrorist group in Iraq and Syria.

Abdeslam was Europe’s most wanted man for months before he was taken into custody in March 2016, following a raid by armed police in the Molenbeek area of Brussels.

Just like his brother, who blew himself up inside a bar in Paris that night, Abdeslam was equipped with a suicide belt, which was found discarded several days after the deadly attacks. The suicide vest reportedly malfunctioned and Abdeslam managed to escape France back home to Brussels.

Investigations found that the attacks were largely planned in Belgium and Abdeslam arranged for multiple rental cars for ISIS terrorists who had slipped into Europe unnoticed among masses of illegal immigrants.

Since his arrest, Abdeslam has refused to speak with investigators. Officials believe he holds the answers to many of the remaining questions about the attack and the people who planned it, both in Europe and abroad.

Prior to the trial, survivors and relatives of the victims had said they were impatient to hear testimony that might help them better understand what happened and why it did so, and that they were also anxious.

The trial is expected to last nine months, with about 1,800 plaintiffs and more than 300 lawyers taking part in what Justice Minister Eric Dupond-Moretti has called an unprecedented judicial marathon. The court’s top judge, Jean-Louis Peries, said it is a historic trial.

“It is important that the victims can bear witness, can tell the perpetrators, the suspects who are on the stand, about the pain,” said Philippe Duperron, whose 30-year-old son Thomas was killed in the attacks.

Police mounted tight security around the Palais de Justice courthouse in central Paris. The defendants will appear behind a reinforced glass partition in a purpose-built courtroom and all people must pass through several checkpoints to enter the court.