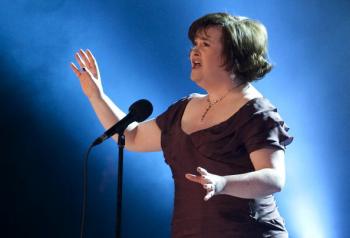 Scottish singer Susan Boyle sings the song 'I Dreamed a Dream' at the Danish relief show 'The Denmark Collection' to raise money for women in Africa and for the victims of the earthquake in Haiti on January 30, 2010, at the Tivoli Concert Hall in Copenhagen (Casper Christoffersen/AFP/Getty Images)
US

Susan Boyle to Sing for Pope

Trevor Piper
View profile
Follow
biggersmaller
Print
Scottish singer Susan Boyle says it will be a dream come true to sing for the Pope during his visit to Scotland next month.

The 49-year-old star of TV talent show Britain's Got Talent is expected to sing three songs in front of a congregation of thousands at an open air mass given by Pope Benedict XVI at Glasgow's Bellahouston Park on September 16, a spokesman for the singer said.

"To be able to sing for the Pope is a great honour and something I've always dreamed of. I can't really put into words my happiness that this wish has come true at last," Boyle, a devout Catholic, said.

She will perform her rendition of 'I Dreamed a Dream', the song that shot her to stardom, for the Pontiff. Boyle's 2009 debut album "I Dreamed a Dream" became the biggest selling album in the world last year, selling 9 million copies worldwide in only six weeks of sales.

Boyle’s plain appearance on stage did not give audiences a strong first impression, but her powerful voice brought her standing ovation during the talent show. Her rendition of the songs 'I Dreamed a Dream' and 'Cry Me a River' have been watched more than 100 million times online and various media interviews led to international fame.