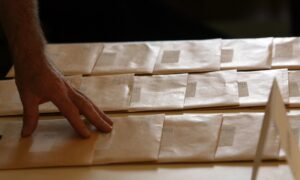 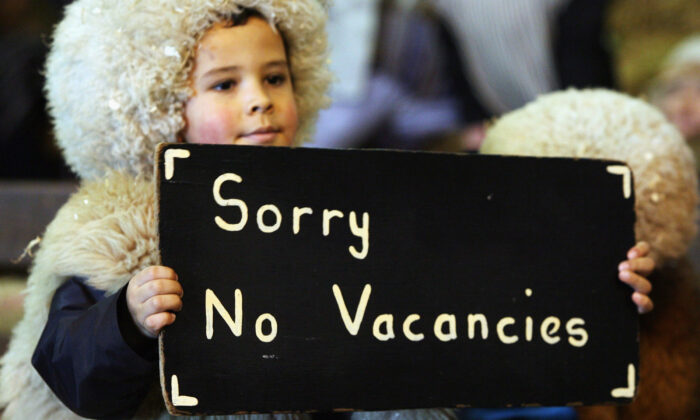 In this file photo, school children from local schools perform in the traditional nativity play hosted in a barn at Pennywell Farm Activity Centre near Buckfastleigh in Devon, England on Dec. 11, 2008. (Matt Cardy/Getty Images)
UK

Survey: 1 in 20 Schools in England Plan to Have In-person Nativity

Fewer than 1 in 20 schools in England are planning on having their usual Christmas nativity plays this year due to CCP virus curbs, according to a survey of teachers.

Even that small proportion believe they might need to shift the performance to online only.

The numbers vary a little from region to region, but around half of the schools will not have a nativity play at all this year, according to the survey published on Monday. Around 4 in 10 say they will go ahead—but with online performances.

In London, 16 percent of teachers said that their school would not typically have a nativity play anyway.

Without the need to perform to a live audience, some schools are taking the opportunity to blend more pre-recorded filming into their performances or take other approaches.

The survey by Teacher Tapp, which was answered by 1,483 teachers, also examined the challenges of social distancing in schools.

In primary schools, 68 percent of teachers said that for most of the day they could not maintain the one-metre rule. That number was just 20 percent in secondary schools.

“Other than secondary heads—who are the least likely people to be teaching in a classroom on any given day—only a tiny percentage of teachers said they had not been within 1 m of a student all day,” Teacher Tapp said in a statement on the survey.

The government has so far resisted calls from teaching unions to shut schools as part of the national lockdown in England.

A report last week by the official education watchdog revealed that school closures have caused already-struggling children to regress.

“Some young children, who were previously potty-trained, have lapsed back into nappies, particularly those whose parents were unable to work flexibly,” Ofsted said in a statement.

“Older children have lost stamina in their reading and writing, some have lost physical fitness, others show signs of mental distress, including an increase in eating disorders and self-harm.”

The government in Wales has announced that A-Level and GCSE pupils next year will not have to sit exams.

Education Minister Kirsty Williams on Nov. 10 said that in place of the exams, pupils will be graded through teacher-managed assessments in the classroom.

For pupils in England, the central government has said it will not follow suit, in line with an earlier pledge that exams will go ahead in the summer, albeit delayed by three weeks.

For pupils in England, UK Education Secretary Gavin Williamson said on Oct. 12 that most A-Level and GCSE exams will be held next year, although three weeks later than usual.

Contingency plans will also be drawn up over the next six weeks to handle any potential disruptions to the students’ exam process.