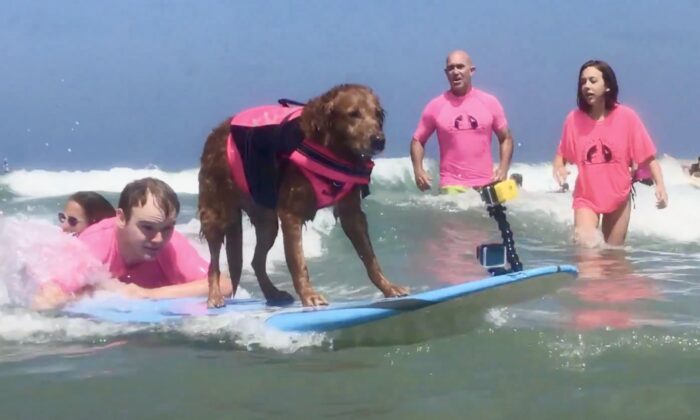 Surf Dog Ricochet (C) & Patrick Ivison (L) caught waves to celebrate their 10th anniversary of the first-ever canine assisted tandem surf session between a surfing dog and an individual with a disability on Aug. 2018. (Screenshot via YouTube/ SurfDogRicochet)
Southern California

The 14-year-old Ricochet became the first surf therapy dog in 2009, but has been in declining health and needs assistance to get on the board. Martinez, a triple-amputee and purple heart recipient, and Ricochet will take to the water at La Jolla Shores Saturday morning to raise funds for the Guardian Project, an initiative of Whiteheart, a non-profit organization that makes a difference in the lives of veterans.

Martinez lost his limbs after stepping on a 60-pound improvised explosive device meant for a vehicle in Afghanistan in 2012.

The force of the blast threw him in the air and instantly amputated both his legs, right arm, a finger on his left hand, and some internal organs. His unit worked to save his life before an airlift to the hospital, where he awoke from a coma 10 days later.

In 2014, Martinez was introduced to surfing as part of his rehabilitation at the Naval Medical Center San Diego.  Martinez said he didn’t surf prior to his accident, but now he “can’t imagine life without it.”

Ricochet has been sponsoring him for several years and her owner, Judy Fridono, said she couldn’t think of anyone better to assist Ricochet in the waves.

Earlier this year, Ricochet had a fast-growing tumor removed from her right side. Part of the incision didn’t heal for seven weeks. As such, she lost strength in her hind legs and has been in rehab ever since.

In addition, she was recently diagnosed with the beginnings of kidney disease, and an ultrasound last week showed a mass in her liver. She will have a CT scan next week, Fridono said. She also has arthritis in her spine, most likely from surfing with hundreds of kids with special needs all these years.

Ricochet first jumped on the surfboard belonging to a 14-year-old boy with a spinal cord injury. Fridono said she started on the ground floor of adaptive surfing and has been involved in the movement ever since. Her roots are part of her legacy and commitment to helping service members and veterans with post-traumatic stress disorder (PTSD), as well as wounded warriors and adaptive surfers.

Martinez’s fundraising goal is $10,000, intended to provide 10 veterans with a free remote outdoor excursion with the goal of improving mental and physical well-being.

This environment is intended to create a comfortable space where veterans battling post-traumatic stress or military sexual trauma can open up and relate to others who have had a similar experience.

To make a donation to the Guardian Project, click here.