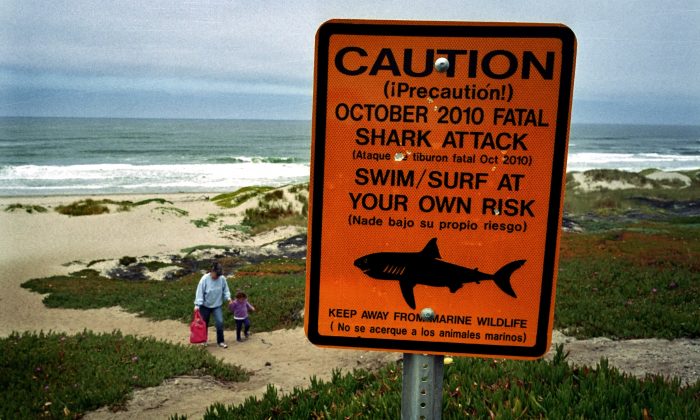 This July 11, 2011 photo shows a shark warning sign along the Surf Beach near Lompoc, Calif. in Santa Barbara County. A shark attack at the Vandenberg Air Force base beach has claimed the life of an experienced 39-year-old surfer in October 2012, following months of frequent shark sightings along the central California coast. The surfer was killed at the same central California beach where a beachgoer was killed in 2010. (AP Photo/Michael Fernandez)
US

Shark attacks at Surf Beach in California are being explored during Shark Week on Monday night.

The Great White Serial Killer: #ExtraSharky program starts at 8 p.m. EDT and will run for about an hour.

“With extra footage and live social media updates–look into the mystery of similar shark attacks at Surf Beach in California,” the network says in a program description.

“The same 16-foot great white may be returning to the beach in a 2-year pattern & the next possible attack date is approaching.”

Surf Beach, about 150 miles northwest of Los Angeles, has been the site of several shark attack deaths over the years.

In October 2010, 19-year-old University of California, Santa Barbara student Lucas Ransom died when a shark nearly severed his leg as he body-boarded.

Two years later, 39-year-old surfer Francisco Javier Solorio Jr. of Orcutt was killed in a shark attack. He was bitten in his upper torso.

Solorio “had a friend who he was surfing with who saw the shark bite or hit the man,” said sheriff’s Sgt. Mark A. Williams. “His friend ended up swimming over and pulling him from the water where he received first aid.”

The friend started first aid while another surfer called for help, but Solorio was pronounced dead by paramedics at the scene.

The Discovery Channel seems to be saying that the same great white shark killed both men and that the shark will try to kill someone else in October 2014. However, authorities have said that the shark in the first attack was 15 to 16 feet long while the one in the second attack was 17 to 18 feet long, although both were identified as great whites.

Also, death by shark attack is rare. An average of 65 shark attacks occur each year around the world that typically result in two or three deaths, according to the Pew Environment Group.

Ralph Collier, a shark attack expert who is founder and president of the Los Angeles-based Shark Research Committee, noted at the time that great whites only attack humans when they mistake them for seals or other animals.

“If white sharks were going to target humans for prey, I would never talk to any survivors,” Collier said. “Because there’s no way you or I could ever survive an attack by a 17-foot shark that weighs 4,000 pounds.”

It is likely that the shark that bit Solorio failed to identify the surfer and “struck out at this shape assuming it was a natural prey,” Collier said.

“The way it investigates is by taking a gentle bite but unfortunately, what seems like a gentle bite to a shark can cause a devastating injury to a human,” Andrew Nosal, a marine biologist at the Scripps Institution of Oceanography in La Jolla.