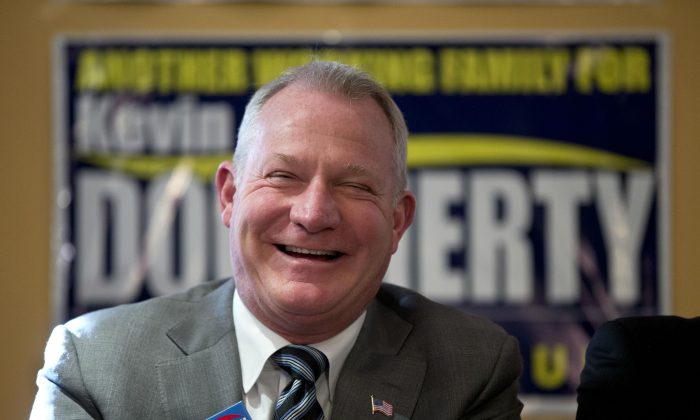 HARRISBURG, Pa.—The results from Tuesday’s state Supreme Court elections were barely in when triumphant Democrats began talking about what the court’s new 5-2 majority will mean for them, including a possible edge in the process of redrawing legislative district lines after the 2020 census.

There’s no doubt the sweep of three open seats on the high court was a major win for the party and will bring changes after several years of turmoil, including the resignation of two justices and an ongoing investigation into a third. The court, which currently has a 3-2 Republican majority and two vacancies, appears likely to remain dominated by Democrats for the foreseeable future.

In the near term, one effect of the election is that the one outgoing justice is working to wrap up his role in the court before returning as a senior judge to Superior Court.

Justice Corry Stevens was appointed by Gov. Tom Corbett in 2013 to fill the vacancy created by the arrest and prosecution of Justice Joan Orie Melvin. Melvin was convicted of using her staff to work on political campaigns. Another justice, Seamus McCaffery, abruptly retired last year after being linked to a pornographic email ring. Justice Michael Eakin is currently under investigation for his email practices as well.

Stevens, a Republican who has also served as a district attorney and state lawmaker from Democratic-leaning Luzerne County, said public perceptions of party bias in the high court can be overblown.

But there are reasons why partisan groups poured millions into the race, and in recent years the high court has taken up a number of politically charged cases, including public corruption criminal cases, natural gas drilling rules and voter ID.

The last redistricting process ended up in court and it was a Republican justice, Ronald Castille, who cast a swing vote to send the Legislative Reapportionment Commission back to work.

In that case, the majority said the maps had split too many municipalities and was not being sufficiently compact, noting Senate districts that looked like a wishbone, a crooked finger and an iron cross.

The five-member commission consists of floor leaders of both parties in the House and Senate and a fifth member they choose. If they can’t decide—and usually, they can’t—the Supreme Court picks the fifth member. The Republican-majority court picked a Republican judge.

That’s not to say this week’s vote means Democrats will have a free hand in the next process, or that it will produce a partisan result.

“The redistricting commission is made up of Republicans and Democrats, and if you looked at the votes, they were bipartisan votes,” said House Republican spokesman Steve Miskin. “Democrats voted for our maps as well. It wasn’t a Republican map.”

That process is six years away, and in the meantime new justices Christine Donohue, David Wecht and Kevin Dougherty will have ample time to live up to campaign promises to improve the court’s integrity and restore public confidence in the tarnished institution.

“I think there’s a real opportunity for the Supreme Court to move into its next chapter, with three new justices out of seven,” said Lynn Marks with Pennsylvanians for Modern Courts.

Stevens, who worked with Donohue and Wecht on Superior Court and knows Dougherty, is optimistic about that next chapter.

“I think people can be very comfortable with the new justices-elect,” Stevens said. “They’re good, solid jurists, all three of them—I’m confident of that.”