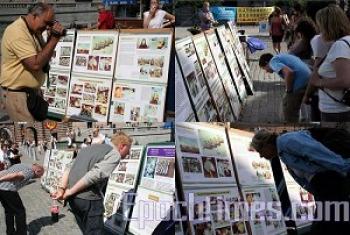 By Li Zhong
Print
STOCKHOLM—On July 5, 2008, the Northern Europe Service Center for Quitting the CCP held an event at Mynttorget (Swedish for Coin Square) in Sweden’s capital of Stockholm to help people quit the Communist Party. The event offered voice support for the service centers in Flushing, New York City as well for over 39 million people who have quit the CCP and its affiliated organizations, and to help more Chinese to quit the CCP as well as Westerners learning about  the true nature of the CCP.
Mynttorget is located in the old town of Stockholm. It is next to the royal palace where the changing of the guards takes place; it’s also the only access path into the old town. Summer is a busy season with tourists from around the world. Volunteers of the service center arrived at Mynttorget at 11:00 a.m. They unfurled banners that read “Northern Europe Service Center for Quitting the CCP” and “CCP’s Evil Spirit Has Been Uprooted; Quitting the CCP Helps Disintegrate It; Support 39 Million People Who Have Renounced the CCP.” The volunteers also set up display boards reading the Nine Commentaries on the Communist Party .
Quite a few Westerners showed up to help distribute copies of the Nine Commentaries and brochures persuading people to quit the CCP. The royal guards’ changing ceremony in front of the royal palace is quite an event in summer, which attracts a lot of tourists from other countries. Vasilios, a Westerner volunteer, invited his whole family to the service center. He and his daughter carried a lot of materials to the site next to the royal palace. They distributed the materials to tourists from China. Pedestrians and bus riders were all attracted by the banners calling people to quit the Communist Party. People gathered in front of the display board and took brochures about quitting the CCP and information about the Nine Commentaries on the Communist Party. Some volunteers were gathering signatures to stop the persecution of Falun Gong. Many Westerners signed their names voluntarily.
Doconasile is a young man from Romania. At the beginning he was not that kind to volunteers at the service center, because he thought they were promoting and powdering the Communist Party. When he realized it was about quitting the Communist Party and its significance, he gladly took the brochure and chatted with Jorgen. Doconasile said, “The Communist Party was so terrible. We who lived in the former Communist countries all know it does nothing but harm people.” He pointed to scars on his face and arms and explained, “These were left by the Communists. Romania is now in good hands. Our people have got rid of the Communist Party. I believe China will be better without the CCP.” He left happily with a copy of the Nine Commentaries and reports from The Epoch Times. A Swedish gentleman asked for some Chinese brochures after taking a Swedish one. He said he was going to give the information to three of his Chinese colleagues.
Jens, a Westerner volunteer, made a speech introducing to the public the Service Center for Quitting the CCP and the current situation of people in China who are renouncing the Communist Party. He said, “Recently the number of people who have quit the CCP has gone up significantly. The mishandling of the earthquake in Sichuan Province as well as the (rape and murder) incident in Weng’an County, Guizhou Province, helped people to see the true nature of the CCP. In the past two weeks alone, over a million people have quit the CCP. It is both the heavenly will and people’s consensus to disintegrate the CCP. The spread of violence in Flushing, New York City and in Poland by the CCP has helped people in the West to realize the CCP’s evil nature. Here, we voice our support for the Service Center for Quitting the CCP in Flushing, New York City and our support for 39 million people who have renounced the Communist Party.”
By 4:00 p.m. most materials were gone and volunteers were pleased to conclude the day’s event. They said, “July is the global month of renouncing the Communist Party. We will be here again next Saturday.”
TOP NEWS