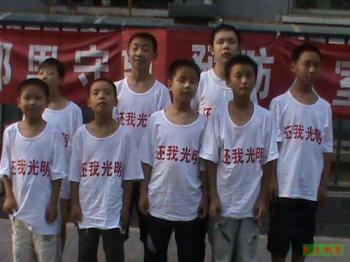 The children with eyesight damage appeal, with their parents, in Beijing. (Civil Rights & Livelihood Watch)
China

Gu Qing'er
View profile
Follow
biggersmaller
Print
More than 30 children, thought to have been given an overdose of supplemental oxygen at birth, are now partially blind and demanding action by the authorities. Hailing from China’s central Hubei Province, their case has attracted the attention of the China-based Civil Rights and Livelihood Watch NGO. Communist Party officials have been less than enthusiastic in dealing with their concerns, however.

On July 19 eight parents took their partially blind children to Beijing, part of a protest strategy that they have been engaged in since 2004. In T-shirts saying “Return my light,” the children and their parents chanted, sung, and pleaded, for three consecutive days, until an official met with them.

“They don’t care. They don’t have the slightest sense of responsibility. They blamed us for making the appeal,” said Mr. Yang, a parent of one of the children. “Our appeals were stopped and we were sent back home.”

The children were born from 1994 to 2002 in the People’s Hospital in Zhongxiang City, Hubei Province. “The hospital did it for financial gain. It was the pilot phase of using oxygen on neonatal babies. The children became guinea pigs. If there were a minor illness, the hospital would send the kids for oxygen treatment in the neonatal Obstetrics and Gynecology Center,” Mr. Yang said.

It was three months after his child’s birth that he found something wrong with his eyes: a white dot at the pupil. “The hospital said it is congenital cataract, but actually it was retinopathy [caused by oxygen toxicity].” His child underwent an eye lens extraction surgery, at eight months of age.

An investigation by the Health Department of Hubei Province, initiated by the parents’ complaints, concluded that “no clear causal relationship” could be established between the eyesight disabilities the children suffer and the supplemental oxygen they were administered. Mr. Yang pointed out the team who conducted the investigation were part of the same hospital system.

Damage to the developing eyes of infants exposed to high oxygen fraction is a known fact, as documented by a New England Journal of Medicine article in 1998. In a 2006 publication in Pediatrics, pediatric research experts from Norway and Spain strongly warn against using 100% oxygen for newborn resuscitation, suggesting using blenders to reduce oxygen concentration.

No information is available about what precautions have been practiced in the hospitals reportedly using oxygen to treat premature newborns in China.

Jiang Feng, the founder of China’s Blind Children Network, says, “The blindness caused by the reason has increased to 50,000 cases annually in China.” Jiang’s own child suffers from blindness caused by an overdose of supplemental oxygen. His website lists names of people whose children lost their eyesight in this manner, from 22 cities and provinces around the country.

The case has not been reported by domestic media, according to Mr. Liu from Civil Rights and Livelihood Watch. “This implicates the hospital system and the government. Such things generally have trouble being reported in China,” he said in an interview with The Epoch Times.