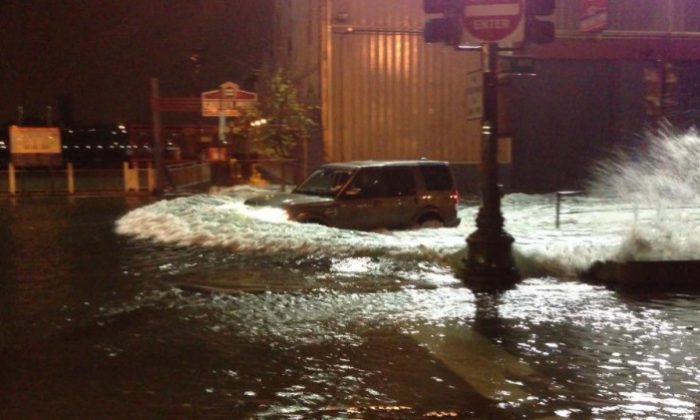 A woman cries on the shoulder of an emergency responder after being evacuated on Oct. 30 from Little Ferry, New Jersey, because of flooding caused by Hurricane Sandy. (Andrew Burton/Getty Images)
US

NEW YORK—New Yorkers struggled to recover from a storm that levied damage across the five boroughs in a powerful buildup that reached its peak Monday night.

Some communities will spend days, weeks, or even months rebuilding what was lost to the destructive force of a storm that was called by many the worst they had ever seen.

“Hurricane Sandy has officially left the New York City area, but the path of destruction if left will be felt for quite some time,” said Mayor Michael Bloomberg Tuesday morning. “It was a storm of unprecedented proportions.”

“It was like a waterfall coming into the Brooklyn Battery Tunnel,” Debbie Lougee, a resident of Lower Manhattan.

“We had to leave the basement and only took what we could carry,” said Lamond Poole, one of the staff at 110 South Wall Street. “It was emotional and disturbing.”

More than 10,000 calls every 30 minutes were pouring into the 911 emergency service on Monday.

The number of New Yorkers without power remained above 2 million late into Tuesday evening, including hundreds of thousands in New York City.

The storm punctured the lives of those in low-lying areas while leaving other areas almost unscathed.

“My district is devastated,” said Assemblyman Alec Brook-Krasny via Twitter, accompanying a series of pictures showing flooding in Coney Island.

But it was Breezy Point and other parts of the Rockaways in Queens—which juts out into an isolated land mass southeast of Coney Island—that may have been hit the hardest.

More than 100 homes were destroyed by fire in Breezy Point alone, along with major flooding and debris in the area. Much of the boardwalk was lifted off of its supports, and pieces had slammed into houses, according to pictures published by Assemblyman Phillip Goldfeder.

“We took a huge beating,” Goldfeder said via Twitter.

Yet in other areas of the city, including Midtown Manhattan, New Yorkers began emerging from their homes early on Tuesday. The only damage some had sustained was a loss of power and a lack of transportation.

“We’re hoping to find a movie theater that’s open,” said Jessica Berk, sitting on the floor charging her phone in a Duane Reade at the corner of 35th St. and Broadway on Tuesday evening.

Berk and companion Steven Edelstein, Union Square residents, had lost power and were looking for something to occupy their time.

Many small businesses remained open throughout the storm, with owners and managers telling The Epoch Times during the peak period on Monday night that they had no plans to close.

Likewise, in areas such as Times Square, one could have been unaware a superstorm was brutally ramming other parts of the city. The area was filled with tourists at 9:45 p.m. Monday.

As Tuesday wore on, updates streamed in from elected officials. New Jersey may have sustained more damage than New York.

“I didn’t expect it to be that bad. I didn’t expect we would see homes off of their foundations and in the middle of state highways,” said Gov. Chris Christie in a morning update, describing homes on the Jersey Shore.

The PATH (the subway system mostly in New Jersey that links to Manhattan) will take 7 to 10 days to restart, said Christie.

Meanwhile in New York City, buses began running, with some exceptions, at 5 p.m. Tuesday, with no fares charged. Taxis had been running almost constantly throughout the storm. Restoration of subway service remains uncertain, with multiples tunnels flooded.

Joseph Lhota, CEO of the Metropolitan Transportation Authority, said in an afternoon briefing that portions of the subway system could be restored on Wednesday. Later, via the authority’s official Twitter account, he said agency officials would be ready to discuss a timetable for restorations by midday Wednesday.

New Yorkers should expect more extreme weather events such as Sandy, according to Gov. Andrew Cuomo.

“I don’t think anyone can sit back anymore and say ‘I’m shocked at that weather pattern,'” he said during a briefing. “There is no weather pattern that can shock me at this point.”