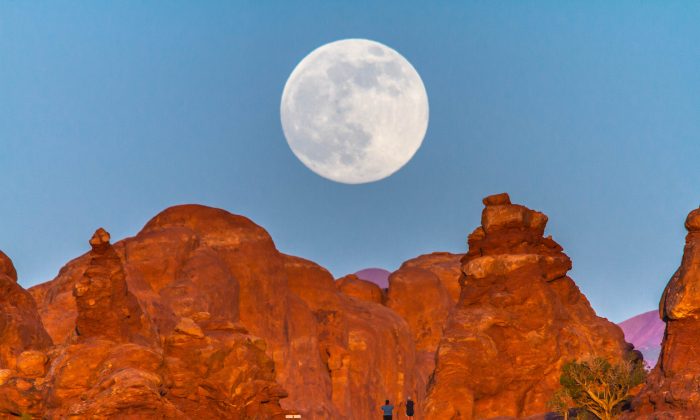 A supermoon—a moon slightly closer to the Earth than usual, and thus larger in the sky—could be visible on Jan. 30. It’s not guaranteed that you’ll be able to see it, but if you want to take a look and get an awesome photo of it, here’s how (tips are suitable for smartphone photographers as well as those with more advanced gear):

Plan when to view it by checking your local moonrise or moonset time with NASA’s app. Capturing the moon on the horizon makes for great photos.

2. Think About Surroundings for Photo

If you take a photo of the moon floating in a dark sky, the size of the moon—the “super” in “supermoon”—will not be apparent. Try to frame it between trees or buildings. Capture a person’s figure silhouetted on the moon. If you live by the sea, try to take a photo from the shore at moonrise.

If you have children, maybe you can tell them to try to touch the moon and capture their excitement or awe.

See the photo gallery above for some inspiration.

3. Use a Timer, Keep it Steady

Keep the camera steady. No matter how steady you think your hands are, you’ll get some shake when you press the button and it will affect the photo. Use a tripod or set your camera up in a very stable position and use a timer or remote shutter release.

If you’re using a smartphone and you have a telescope, you can get an adapter like this one (if you don’t have time to do it for this supermoon, there are supermoons expected July 12, Aug. 10, and Sept. 9 this year): Orion SteadyPix Telescope Photo Adapter for iPhone.

Get in close with long optical zoom on a point-and-shoot or with a telephoto lens.

If you’re using a smartphone you can use an app, such as the Slow Shutter for iPhone to get a long exposure.

For those with more advanced cameras, Nasim Mansurov of Photography Life suggests enabling exposure delay. Set the camera to manual mode and use the following settings as a starting point as recommended by Mansurov, adjusting as needed after taking test shots: A low ISO of 100 to 200; aperture between f/8 and f/11 (some other photographers suggest f/2 or f/16); a shutter speed between 1/125 and 1/500 of a second (other photographers give similar suggestions).

-Use live view to get the focus.  David Peterson, on the Digital Photo Secrets website, says “Most of the time you can set the focus to infinity.” Setting it beyond infinity will make the moon blurry.

-Shoot in RAW. It’s better to slightly over-expose and fix it during photo editing later, says Mansurov, than to under-expose.

Send us your photos and one of them may be featured as our “Photo of the Day.”

MORE: Supermoon 2014: New Moon Could be Visible on January 30

*Image of supermoon in Negev, Israel via Shutterstock

*Image of supermoon in hazy sky via Shutterstock