Supermodel Stacey McKenzie on the Authenticity of Shen Yun 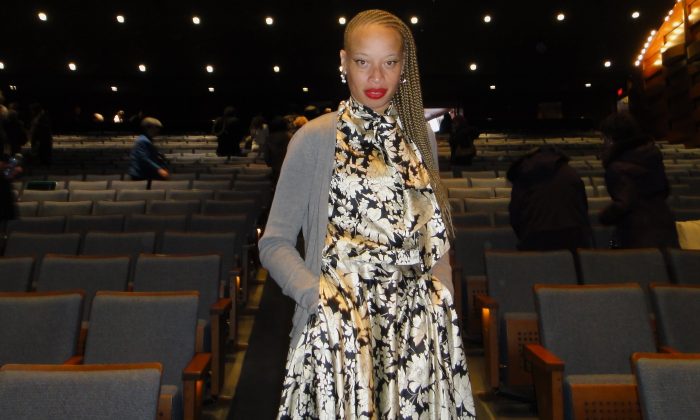 Supermodel Stacey McKenzie has appeared in campaigns for Calvin Klein CK, MAC, Mexx, Reebok, and many others. On Friday, she appeared at Sony Centre and shared her thoughts on the perfection of Shen Yun Performing Arts. (Teng Dongyu/Epoch Times)

TORONTO—Stacey McKenzie has made a living from being beautiful. A certified Canadian super model, her image has been in fashion magazines and on television screens around the world.

On Friday night she brought her niece to see Shen Yun Performing Arts and left gushing about the vision presented, and the authenticity of the performers.

She said whether Shen Yun’s dancers were playing certain parts or simply dancing, the culture they presented looked deeply personal and genuine.

“It was amazing. It didn’t look like they were trying to dance … You could tell it was embedded in them—it’s a part of who they are.”

It’s an observation that lands at the very heart of what makes Shen Yun what it is. Shen Yun was born in 2006, explains the company’s website, “when leading classical Chinese artists came together in New York to revive the true, divinely inspired culture of China and share it with the world.”

Ms. McKenzie said the sincerity of Shen Yun’s dancers took them one step beyond performers.

“The way they move, right, even the characters they were playing, I didn’t feel like they were actually playing a character. I felt that they were being genuine to who they are in their culture,” she said.

“There was a realness about them.”

Ms. McKenzie has become famous through jobs like being the face of MAC Cosmetics campaigns, the quirky stewardess in Fifth Element with Bruce Willis, and being a judge on Canada’s Next Top Model. She’s known as among the very best at what she does, something she shares with the dancers of Shen Yun.

“They’re brilliant, absolutely brilliant. I would never in a million years … it was so perfect.”

“You know what I loved about it? Their dancing was graceful. It was so effortless but graceful and light and airy and just effortless.”

The music of Shen Yun’s orchestra was similarly well done, she said, describing it as so impeccable she expected it to have come out of a recording studio.

“The orchestra really blew me away. They’re absolutely brilliant.”

“That was another thing too about the performance in its entirety. It was perfect. There were no mistakes.

“It was just like perfection from beginning to end. It was crazy.”

Ms. McKenzie continues to model, but now she is using her success to encourage others to be confident within themselves through her Walk This Way Workshops.

It’s an evolution born out of a string of successes that she hopes can inspire others, including inner city youth, adults or aspiring models.

As a model, it was expected she’d have something to say about the hundreds of hand made, original creation costumes worn by the dancers that night.

“I love the costumes,” she said.

On that point, she highlighted the dance Manchurian Grace and its vision of a Qing Dynasty court complete with a group of Manchurian princesses. Sporting elaborate headdresses and elevated “flower pot” shoes, Manchurian women were famed for their elegant grace, explained Shen Yun’s two emcees.

“I was loving that one … It figures, it’s the most stylish,” she said with a laugh.