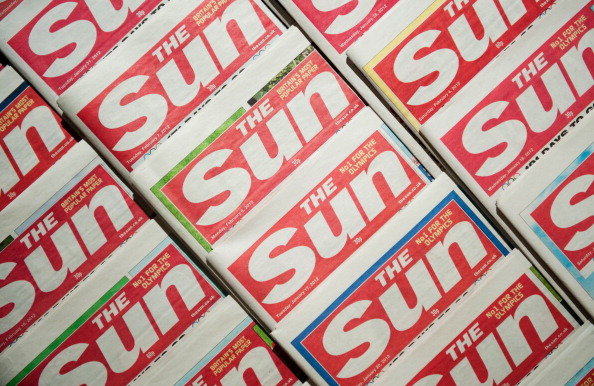 An arrangement of copies of The Sun newspaper front pages on February 13, 2012. Rupert Murdoch's British tabloid The Sun condemned police raids against its journalists as a 'witch-hunt' worthy of former communist states, and won rare support from rival newspapers. (Leon Neal/AFP/Getty Images)
US

The associate editor of the Sun has said the paper’s publisher – News International – is the victim of a “witch-hunt”, after a number of police raids in which some of the paper’s staff were arrested and put on bail.

He accused the Metropolitan Police of being disproportionate in their response. The Met Police rebuffed this accusation saying the three inquiries were “complex”.

Trevor Kavanagh of the Sun told the BBC: “What we feel is over the top and disproportionate is the number of police involved and the number of arrests that have been made.

“No charges have been made and an awful lot of people are having their lives disrupted with dawn raids – by police squads of up to 20 at a time – which we feel is out of proportion.”

But the publication of a prominent comment piece by Kavanagh in the Sun, in which he appeared to criticise the company’s own handling of the investigation, has led to speculation on the internal rifts within the news organisation.

“There are journalists in every other newspaper, including those leading the charge against us, who deploy exactly the same methods and procedures of trying to unearth stories which are in the public interest.”

Talking to Radio 4’s World at One programme, Kavanagh said: “There are people who will stop at nothing to destroy News International.”

One such person, he claims, is Labour MP Tom Watson, who has for a long time ardently pursued News International over phone hacking.

On his blog, Mr Watson said: “It is News International’s behaviour that is to blame for police having to devote immense time and resources to establish the facts.

“By deliberately lying to the police and trashing evidence they have made the job far more complex and expensive than it should have been.”

In a statement, the Met Police said 169 officers and staff were currently working on the three investigations.

It defended the resources put into the operation, saying they were “extremely difficult and complex with literally millions of pieces of documentation needing to be scrutinised and examined”.

It denied the resources devoted to the inquires was “in any way disproportionate to the enormous task in hand”.