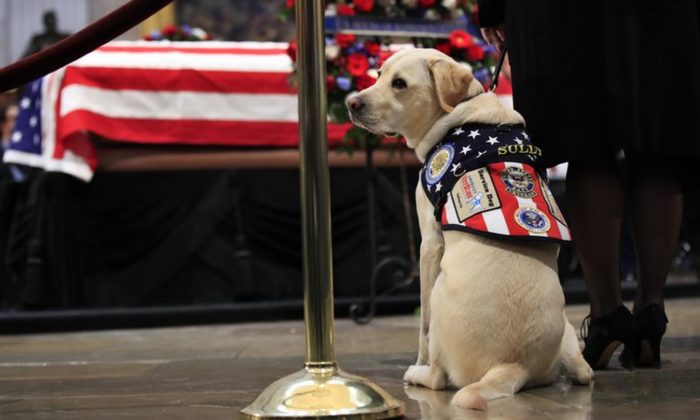 BETHESDA, Md.—Sully, the service dog who symbolized devotion by laying next to former President George H.W. Bush’s flag-draped casket, has a new mission.

Sully offered his paw as he was administered an oath streamed on Facebook to “support, comfort and cheer warriors and their families.”

Sully’s oath said: “Sully H.W. Bush, do you affirm—or pant— as a hospital corpsman in the United States Navy that you will support, comfort and cheer our warriors and their families, active duty and retired?”

In case you missed the weclome ceremony for Sully with our friends at USO-Metro yesterday. Skip to 17:00 to watch Sully join the stage and thank you for all the love and attention from the community.

“That you embrace our staff and bear unconditional love and solace, especially on busy days? That you take this obligation freely, without any promise of treats or tummy rubs and that you will faithfully discharge the duties to provide joy, love and nurturing for our soldiers, sailers, airmen, Marines, and sailors and their families?”

At the conclusion of the oath, Sully was asked to “shake.”

Sully’s Instagram account posted he looks forward to continuing his mission “as my best friend wanted me to.”

The dog was named after the pilot Chesley “Sully” Sullenberger III who became famous for landing a damaged passenger plane on the Hudson River in New York City in 2009 in what was dubbed the “Miracle on the Hudson” incident.

Sully’s trainer, Valerie Cramer, explained to ABC7 that she knew right away that Sully was the perfect dog for the former president.

“From the first moment when the president said, ‘Welcome home,’ I knew it was an absolutely perfect match,” she said.

Former President George W. Bush had contacted Walter Reed to inquire if they knew of an organization that could provide a service dog to his father, who was mourning the death of his wife, Barbara Bush.

“When we received a request for President Bush, we knew we needed to find a dog that was super adaptable because the President did a lot of traveling and got a lot of visitors,” Brad Hibbard, chief program officer at Guide Dog Foundation for the Blind/America’s VetDogs, told CNN.

“We immediately thought of Sully,” Hibbard said. “We knew he was the right dog for the job, especially with Mr. Bush being older and in a wheelchair. He needed a dog that would also help him with daily tasks.”

Cramer said the Bush family told her Sully and the former president shared an incredible bond, and Sully stayed with Bush almost around the clock during his final days.

It has been a week since I arrived at Walker’s Point. I’ve met some pretty cool people, a lot of them wanted to shake my bosses hand (and mine!). Played fetch, been to the beach, and have been spending a lot of time with my boss— I think I am going to like it here. . . . . . #america #flag #oldglory #SullyHWBush #SullyBush #bush41 #instagood #goodboy #DogOfInstagram #TalesOfALab #InstaDog #InstaDogs #Dogs #AmericasVetDogs #GuidedogFoundation #labrador

“Not only is he good at retrieving things, he helped the President by opening doors, knew when to get assistance from someone else, and knew when Bush needed comfort, so he would place his head on his lap,” Hibbard said.

Following the former president’s death, a picture of Sully lying in front of his casket with the caption, “Mission Complete,” went viral.