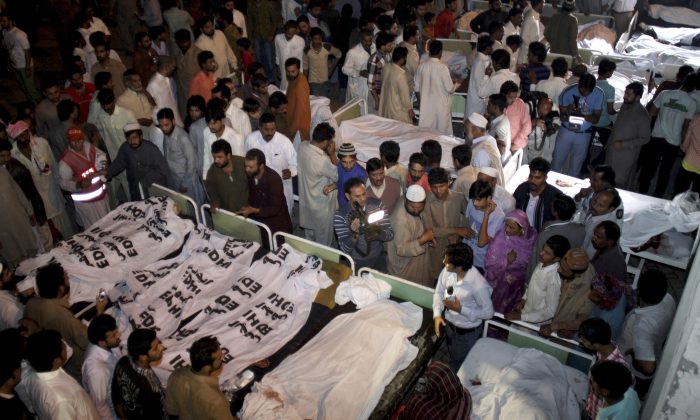 Pakistanis gather to identify bodies of their relatives killed in a bomb blast at a local hospital in Lahore, Pakistan, Nov. 2, 2014. A bomb exploded near a Pakistani paramilitary checkpoint Sunday, killing scores of people near the country's eastern border with India in an attack suspected to be the work of a suicide bomber, police said. (AP Photo/K.M. Chaudary)
Asia & Pacific

LAHORE, Pakistan—A suicide bomber detonated explosives near a Pakistani paramilitary checkpoint near the country’s eastern border with India on Sunday, killing at least 54 people in the deadliest attack to hit the country in several months, police and government officers said.

The explosion hit near the checkpoint at the Wagah border crossing as hundreds of people were returning from a military parade on the outskirts of Lahore, provincial police chief Mushtaq Sukhera said.

Both the Pakistani and the Indian military conduct daily parades and flag-flying ceremonies on their respective sides of the border. The events draw crowds of hundreds, a number that would rise into the thousands on a weekend like Sunday.

The death toll was likely to rise because over 100 people were wounded, with several in critical condition, Sukhera said.

Police are investigating the bombing, and had intelligence reports in advance that there could be such a blast in the city, he added.

Dr. Khurram Shahzad at private Ghurki Trust hospital said that there were 10 women and seven children among the dead, and eight members of a single family. He said several of them had multiple critical wounds.

Live TV footage on private Pakistani news channels showed people drenched in blood and crying in pain as they were evacuated to hospitals.

At the hospitals, relatives of the dead cried and beat their chests and heads. “My brothers, my two brothers,” private Geo News TV showed a man wailing. “They both are dead.”

All the officers said they did not know what the target could have been. Javed, the paramilitary official, said the bomber exploded hardly 500 meters away from the checkpoint manned by the paramilitary troops.

Security has been increased in all major Pakistani cities to thwart possible attacks on minority Shiite Muslims observing Ashura, a 10-day ritual to commemorate the death of Imam Hussain, the grandson of Prophet Muhammad.

But, Haider, the police officer, said there was no such Shiite processions happening in the area where the bombing took place.

Ahrar was set up some months ago by half a dozen militant commanders who previously worked for the outfit but had evolved differences with its chief.

Its spokesman, Ahsanullah Ahsan, said the suicide attack was part of the militants’ war against the government and their attempts to enforce their version of Islamic law in the country. “We will continue such attacks,” he told an Associated Press reporter by phone from an undisclosed location.

The militants have been waging a war against the state for over a decade, aiming to topple the government, killing thousands of Pakistanis.

At present, the Pakistani army is fighting the militants in their last safe haven, in the tribal area of North Waziristan where they say they have killed over 1,200 insurgents.

The militants have been on the run, some of them relocating them to other tribal areas and others managing to escape to neighboring Afghanistan.

The suicide bombing was the deadliest attack in Pakistan since the military launched the offensive in mid-June.