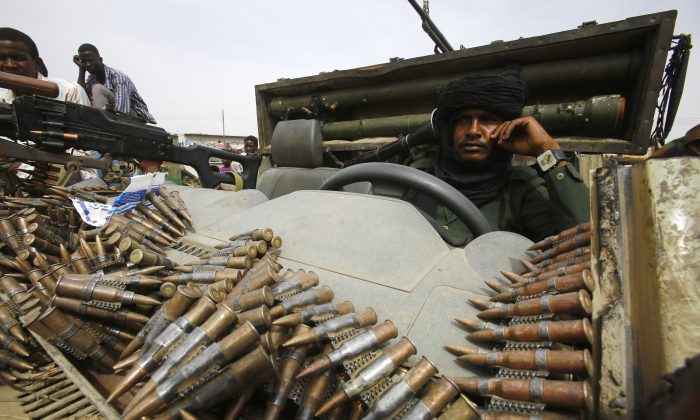 A fighter from the Sudanese Rapid Support Forces sits in an armed vehicle in the city of Nyala, in south Darfur, on May 3, 2015, as they display weapons and vehicles they say they captured from Dafuri rebels and fighters from The Justice and Equality Movement (JEM), lead by opposition leader Jibril Ibrahim, the previous week. Darfur's insurgency was launched in 2003, with the rebels complaining of economic and political marginalization by the Arab-dominated government in Khartoum. Bashir unleashed a brutal counter-offensive using Arab militia and the military. The United Nations says the conflict has killed 300,000 and forced 2.5 million from their homes. (Ashraf Shazly/AFP/Getty Images)
Africa

In remarks published by the pro-government Al-Sudani daily on Saturday, Police Chief Atif Fadul said 13 civilians and six policemen were wounded in the protests, which took place in front of and inside the governor’s office on Jan. 10. Those figures are the first official toll to emerge from the unrest.

The African Union has expressed concern over “continued tension” in and around the town of Genaina in Western Darfur after residents of Mouli, near the border with Chad, staged a demonstration against an assault by a militia group on their village. The militia’s affiliation is not clear.

Darfur was gripped by bloodshed since 2003 when rebels took up arms against the government in Khartoum, accusing it of discrimination and neglect. Some 300,000 people were killed and 2 million displaced during the government’s harsh response to the armed rebellion.