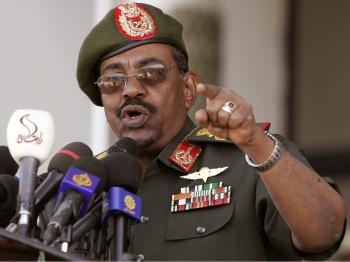 The International Criminal Court (ICC) arrest warrant accuses Bashir of coordinating the design and implementation of a counter-insurgency campaign against southern Sudanese in Darfur. Seven crimes are listed: crimes against humanity: murder, extermination, forcible transfer, torture and rape. The war crimes are: intentionally directing attacks against a civilian population and pillaging.

Since the international court in The Hague has no enforcement authority, it depends on cooperation of friendly states to arrest Bashir. If Bashir fails to cooperate with the arrest warrant—as he said he would—the ICC can turn to the U.N. Security Council to deal with it.

The Darfur genocide started in 2003 during the clashes between the Sudanese government and secessionist rebel forces. The Sudanese army and the Janjaweed militia started to attack civilians. This clash was not between Muslims and Christians as previous clashes, but between Muslims of Arabic ethnicity and Muslims of African ethnicity. According to estimations 450,000 have died in the current genocide and 2.5 million have been displaced.

President Bashir is the first head of sitting state against whom an arrest warrant has been issued. The last few years has seen an increasing number of trials against former dictators, accused for crimes against humanity.

Crimes of Other Heads of State

In July 2008 Radovan Karadzic was arrested in Belgrade and accused of war crimes and genocide, being held responsible among other things to slaughter of 8000 Muslims in Srebenica. Slobodan Milosevic died in a U.N. war crimes tribunal's detention center in 2006 after being arrested and charged with crimes against humanity in Kosovo. Both were brought to justice before the International Criminal tribunal for the former Yugoslavia in The Hague.

As expected, regimes which previously supported the Sudanese regime have expressed discontent regarding the arrest warrant. The Chinese regime, which has close economic relations with Bashir's regime, said that the arrest warrant will endanger mediation efforts between the regime and the rebels. The Chinese regime has blocked sanctions against Sudan in the U.N. Security Council many times.

During one of his visits to Sudan, Chinese regime head Hu Jintao promised to build Bashir a new presidential palace. China has also spent over 10 million dollars on developing Sudan's oil fields—while taking over 60 percent of the oil produced and is also the main arms provider of the Islamic Sudanese dictatorship.

The Chinese regime has good reason to thwart the ICC's activity. It has been conducting a genocidal campaign against the practitioners of the spiritual practice Falun Gong for nine years, including arbitrary arrests, torture, murder, rape, and harvesting of practitioners’ organs for profit.