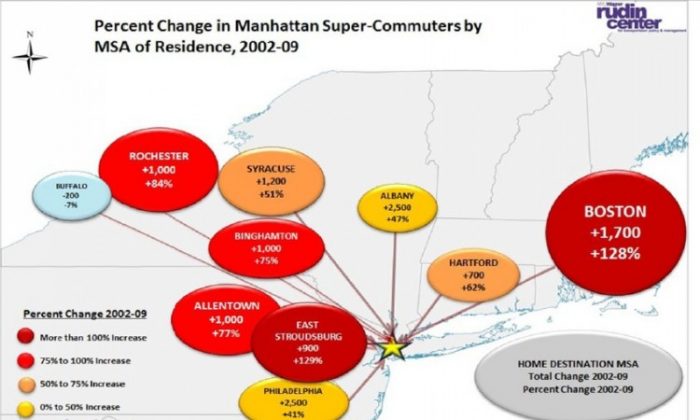 A graphic showing the growth of supercommuters around Manhattan. (Courtesy of NYU Rudin Center for Transportation)
US

Study Shows Supercommuters on the Rise

NEW YORK—Workers are increasingly taking advantage of technology to conduct work anywhere but the office— whether it be preparing a report on a plane or attending a videoconference from home.

A new study documents the “emergence of the supercommuter,” a person who works in a metropolitan area—such as Manhattan—but lives outside the area—such as in Boston—and commutes long distance. They often only commute once or twice a week and rely on communication technology such as email, phone, and videoconferencing.

Researchers from NYU Wagner’s Rudin Center for Transportation Policy and Management used U.S census data for the study, titled “The Emergence of the Super-Commuter,” which looked at the 10 largest metropolitan areas, and found growth in eight of them.

Harris County (Houston) (251,000), and Dallas, Texas (176,000) have the most supercommuters. Manhattan has the fourth fastest growth rate of supercommuters.

Between 2002 and 2009, there was a 60 percent increase or an additional 22,200 supercommuters into Manhattan, the center of the New York City-Newark-Bridgeport area. Out of the 59,000 total supercommuters into Manhattan, the most, 8,600, are from the Philadelphia metro area, which includes parts of Pennsylvania, New Jersey, Delaware, and Maryland.

Besides Philadelphia, most nonlocal Manhattan workers also come from Albany and Syracuse. Boston to Manhattan was one of the top growing supercommutes, increasing by 1,700 over the seven years studied.

Supercommuters did not include people living within the NYC metro area, or surrounding metro areas, such as Bridgeport, New Haven, and Poughkeepsie.

These supercommuters, 3 percent of the workforce, are more likely to be younger than 29 years old and earn $15,000 less per year than the average worker.

The researchers say future planning decisions should recognize the study findings and the resulting connection between cities. “While twin cities of the past typically sat 40 miles apart,” the study states, “the new twin cities stretch 100-200 miles away from one another, with ever-growing intercommutes.”