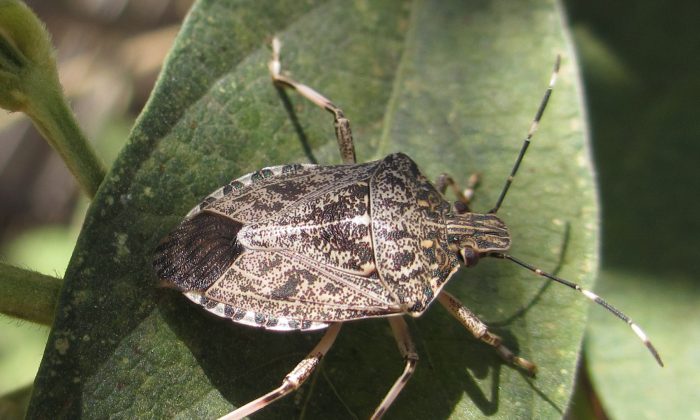 A stock photo of a stink bug. (Ton Rulkens/Wikimedia Commons)
US News

Study: Polar Vortex Killed 95 Percent of Stink Bugs in the US

A study has found that the recent “polar vortex” might have killed 95 percent of stink bugs that hadn’t found shelter to stay warm over the winter.

A release from the National Pest Management Association cited a study from Virginia Tech University for the finding.

The study said that other invasive bugs like the Emerald ash borer and southern pine beetles may not have survived the vortex.

“Invasive species in the Northeast such as the emerald ash borer and southern pine beetle aren’t likely to survive the winter cold, but New York City cockroaches and bed bug populations will unfortunately not be affected. Also, even if adult pests freeze, they may have already laid eggs which will hatch when the weather warms,” said the news release.

The vortex brought travel disruptions, outages, fatalities, and injuries when it affected the United States in late January.

“While most insects will be equipped to survive a short period of very cold weather, like the recent polar vortex, it’s likely some will die from this extreme weather event,” said Dr. Brittany Campbell, an entomologist with the NPMA, AccuWeather reported.

Campbell said that regions that typically don’t experience low temperatures will lose the most stink bugs.

The pests in those areas are least equipped to deal with the cold, the report said.

“In regions of the country that commonly experience winter temperatures below 50 [degrees Fahrenheit], most insects have already entered diapause, which is a period of inactivity,” Campbell said.

But some insects are able to withstand subzero temperatures.

“That said, we won’t be entirely certain of the impacts until spring occurs,” Campbell said.

“In addition to the effect of extremely cold weather on pests themselves, damage to plants and other animals can also disrupt food supplies for insects in the spring and summer, driving them indoors,” Campbell noted.

The NPMA release said that cockroaches and bed bugs in New York City weren’t likely affected by the polar vortex.

The dangerous deep freeze may have brought us a silver lining.

The insects that were least likely to be impacted are the ones that spend most of the time indoors inside human environments. Cockroaches and bed bugs are usually only found indoors and are insulated from the extreme cold, according to the NPMA.

It added that those insects have already laid eggs which hatch when the weather gets warmer.

“It’s difficult to determine the species that would be most impacted, considering many of the insects in northern regions are equipped to handle freezing temperatures,” Campbell said.

Polar vortex silver lining? Researchers say that it may have killed up to 95% of the stink bug population – but there's a catch:

Some species of spiders, ticks, springtails, and mites may have been impacted by freezing temperatures, the AccuWeather report said.

But, “As for pests like ants, mosquitoes and termites, many people assume they just die off, but the truth is that these and other insects often devise strategies to make it through the winter,” said the NPMA release.

In terrifying synchrony, baby stink bugs all but explode to life.

Regarding ants, they are “very successful at overwintering in the great outdoors, including our own yards,” said the news release.

“During the fall months, they indulge in vast amounts of food with the goal of putting on fat to survive for weeks on end without eating,” it says.

“As the winter chill arrives, their body temperature … significantly decreases, so they seal up their colony and hunker down in deep soil or under rocks until spring has sprung. Once the temperature rises, ants will emerge from their overwintering sites, full of energy and ready to crash the next backyard barbecue.”