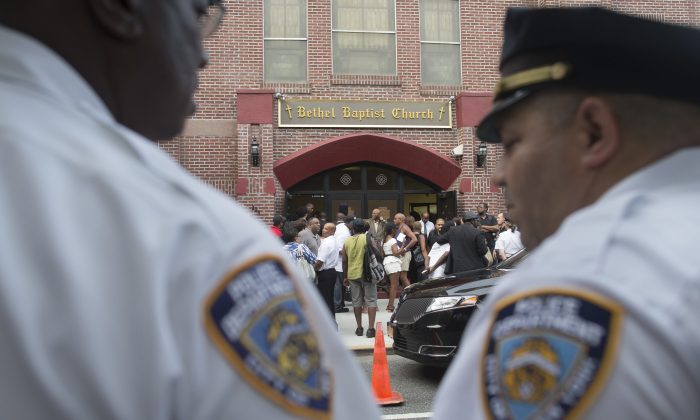 In this July 23, 2014, photo, a pair of New York City police officers stand at their post as mourners arrive for the funeral service of Eric Garner at Bethel Baptist Church in the Brooklyn borough of New York. Garner died on July 17, 2014. (AP Photo/John Minchillo)
New York

The New York City police department failed to enforce its own ban on the use of the chokehold when subduing suspects, according to a recent report compiled by the Civilian Complaint Review Board (CCRB), the city agency responsible for investigating the public’s complaints of police misconduct.

The chokehold was banned by the police department in 1993 under this definition: “a chokehold shall include, but is limited to, any pressure to the throat or windpipe, which may prevent or hinder breathing or reduce intake of air.”

The CCRB report was prompted by the death of Eric Garner, who died in July after a police officer placed him in a chokehold while attempting to arrest him for selling untaxed cigarettes.

Following Garner’s death, the CCRB chair, Richard Emery called for a study into the more than 1,000 chokehold complaints the agency received from 2009 to 2014.

The New York Post obtained a copy of the draft report ahead of its anticipated public release this week, and has since published it on Scribd, the online e-book-sharing site.

The CCRB’s 119-page report cites the police department’s failure to discipline its officers for using the chokehold maneuver, as the cause for the chokehold definition gradually narrowing to the use of force only being improper when it restricts a suspect’s breathing, rather than prohibiting it all together.

The rule “mutated” within both the CCRB and the NYPD.

Disciplinary judges at the NYPD consistently refused to follow the definition of a chokehold as written. “As a result, officers who applied pressure to complainants’ necks were not disciplined and CCRB investigators and Department prosecutors responded by not pursuing chokehold cases that should have been recognized as falling under the Department’s prohibition,” according to the report.

This trend could be observed from the data the CCRB cited. From 2009 to June 2014, the CCRB closed 1,128 cases of chokehold complaints, of which only 10 cases were substantiated, or found to have been valid.

In all 10 cases, the CCRB recommended the most serious form of discipline, “charges and specifications,” which according to the CCRB website, “involves the lodging of formal administrative charges against the subject officer who, as a result, may face loss of vacation time, suspension, or termination from the police department.”

The police department only served such punishment in three cases.

The study also found that the CCRB failed to categorize 156 chokehold incidents as chokehold cases, or only categorized them as use of force.

The CCRB classifies their complaints into four general categories: excessive or unnecessary force, abuse of authority, discourtesy, and offensive language. Again, the under-counting was due to CCRB investigators failing to use a consistent definition of a chokehold.

The CCRB also found a severe delay in its ability to conclude investigations. From 2009 to June 2014, the average number of days to complete a full investigation of a chokehold incident was 369 days. Non-chokehold cases took an average of 327 days.

On Monday, the police union, the Patrolmen’s Benevolent Association (PBA), dismissed the report. “Any report based on unsworn, unsubstantiated, and poorly investigated complaints that were filed by criminals is totally meaningless,” the PBA president Patrick J. Lynch said in a statement.

The mayor’s office said via a spokesperson that it is still waiting to review the final version of the study. “As CCRB Chair Richard has been charged with making the agency more effective and efficient, so it can play an important role in bringing police and community closer together,” the spokesperson said in an email.

As of the time of this writing, the police department has not responded to a request for comment.

Overall, the highest number of chokehold complaints came from the 75th and 73rd precincts, in East New York and Brownsville, Brooklyn, respectively.