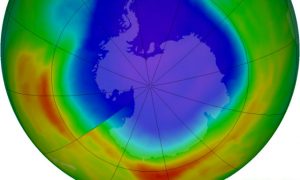 The Antarctic ozone layer may be starting to heal, finds a new study. As an MIT News release about the research states, “The team found that the September ozone hole has shrunk by more than 4 million square kilometers — about half the area of the contiguous United States — since 2000, when ozone depletion was at its peak.”

The ozone layer located in the Earth’s upper atmosphere can help to shield the planet from damaging ultraviolet rays, but a hole in the system was identified in the 1950s.

Scientists had typically measured the gap in October when it is at its largest, but this team decided to focus on September. According to them, the rate of damage from chlorines emitted by chlorofluorocarbons, or CFCs, has already been set by this time.

After analyzing data from 2000 to 2015, the team was able to determine that the hole has become significantly smaller and that “more than half the shrinkage was due solely to the reduction in atmospheric chlorine.” As such, the principle author Susan Solomon has said that she could envision the hole shrinking and disappearing by midcentury.