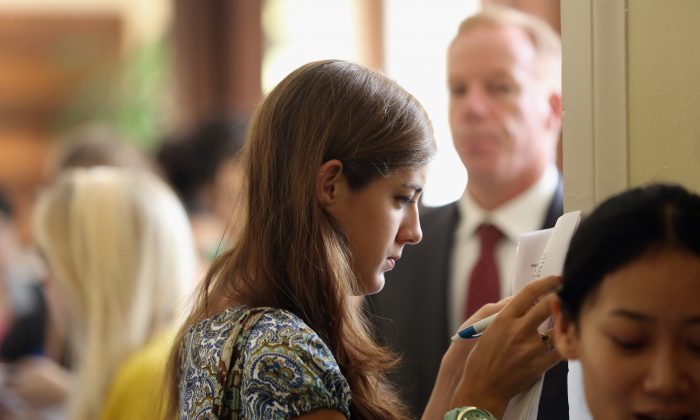 A student registers at a college job fair in New York City in September 2012. With the current level of unemployment, American college grads are finding it increasingly difficult to find jobs and pay back their student loans. (John Moore/Getty Images)
12- OBSOLETE

Federal government profiting from student loans
By Heide B. Malhotra

With the current level of unemployment, American college graduates are finding it difficult to find jobs commensurate with their education. Without a steady income, many former students are unable to pay back their student loans.

America’s unemployment rate was as high as 13.8 percent at the end of March, according to the U.S. Bureau of Labor Statistics’ (BLS) alternative measures of labor underutilization. This number is far higher than the published official statistic of 7.6 percent because it includes those who would like to work but are not currently looking for a job—including so-called discouraged workers—as well as those who only work part-time because they cannot find a full-time job.

The Economic Collapse website said in April 2012 that in 2011 (the latest such statistics available) more than 50 percent of college graduates had not landed a job or had accepted a position that did not make use of their skills. Often, these individuals took a part-time position, leaving them at or below the poverty level.

The Debt.org website states that student debt is at $1 trillion and increases another $3,000 every second. The average student debt amounts to $26,000.

The Federal Reserve Bank of New York (Fed) provides statistics that correspond to the Debt.org information, published at the end of March using data from the last quarter of 2012.

The brief states that the U.S. government earns 36 cents profit on each dollar loaned to students. With an estimated 21.8 million student loan recipients and approximately $108.9 billion in outstanding loans, the federal government will take in $34 billion.

On subsidized Stafford loans, which are federally guaranteed loans based on financial need, the federal government earns an estimated $3.5 billion, while on unsubsidized Stafford loans (also federally guaranteed loans, but anyone may apply for such loans), the federal government makes an estimated $20 billion.

With Grad PLUS and Parent PLUS loans, the federal government makes $5.1 billion and $5.3 billion respectively. Under the Parent PLUS student loan, parents may take out a loan on behalf of their children to cover any amount not covered by any other financial aid package.

The interest rate on federally subsidized loans, which serve low- and moderate-income families, will increase from 3.4 percent to 6.8 percent on July 1.

The interest rate was lowered over time from 6.8 percent to 3.4 percent under the 2007 College Affordability Plan and was meant to return to 6.8 percent in 2012. The Obama administration and Congress extended the availability of the lower rate until July 2013.

The brief suggests that the increase in the interest rate will harm students and only add to the federal government’s profit.

“More than two-thirds of all subsidized student loan borrowers come from families with annual incomes of less than $50,000. These families have been hard hit in the recent recession and continue to face high unemployment and tight family finances,” the brief states.

Student Loan Debt and Defaults on the Rise

Research by credit-scoring company FICO stated on Jan. 30 that student loan defaults are rising at an accelerated rate. At the forefront are students who took out student loans more recently.

A FICO December 2012 survey of lending industry professionals indicates that close to 60 percent of respondents expect student debt delinquencies to rise by mid-2013. Yet these professionals are still providing ever-increasing loan amounts. The average student loan debt was $17,233 in 2005 and had risen by 58 percent to $27,253 by December 2012.

“The stakeholders in the student lending industry have to take a hard look at the terms and repayment rules for student loans, and the industry may have to develop a new lending model to prevent a bad situation from getting completely out of hand,” said Dr. Andrew Jennings, FICO chief analytics officer, in the FICO release.

In 2005, the credit reports of 12 million Americans showed two or more student loans, according to the FICO report. By 2012, that number had more than doubled to 26 million.

“The worsening state of the student loan industry should raise concerns. The combination of lower credit quality, increased debt loads and trying economic conditions will lead to even more distress in the industry,” the FICO report warns.