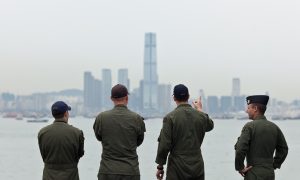 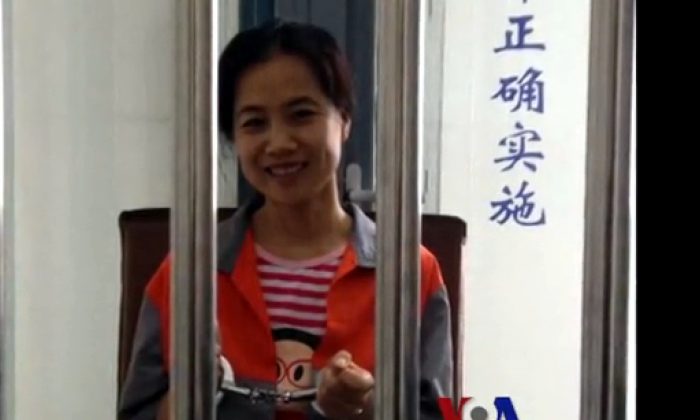 Li Huanjun in handcuffs is in a detention facility in Beijing, 2012. (Screenshot via voachinese.com)
China

Li Huanjun, a former primary school teacher in Beijing, began circumventing China’s Internet restrictions sometime in 2011—not long after she found herself standing on the roof of her house, drenched in gasoline, ready to slash at regime-sponsored intruders with the kitchen knife in her hand.

Like countless others Chinese, Li simply minded her own business and had little interest in the country’s vast censorship apparatus—until she became a victim of forced demolition, and needed to educate herself and fight back.

“My first feeling was: Wow, it’s just like magic. I realized that all the stuff on China Central Television and domestic websites was fake. And I found many others who suffered more cruel treatment than me,” she said in a recent telephone interview.

In its bid to make China’s Internet a walled garden, the regime has forced citizens to use their real names when surfing the Web, launched a focused crackdown on virtual private networks, and pursued with a vengeance anyone inside China with the temerity to buck Beijing’s policies.

The only problem is that one crack in the wall, which China’s Internet authorities just can’t seem to patch over: the anti-circumvention technologies developed by a small group of Chinese-American tech entrepreneurs, with names like Freegate and Ultrasurf.

“These companies represent the great David and Goliath story of my lifetime,” said Michael Horowitz, a former senior fellow at the Hudson Institute who has taken a strong interest in the fate of the two anti-censorship outfits.

“A little bit of money has thus far beat billions of dollars and thousands of the ablest people China can bring into the mix. This is a matter of survival for China—and they throw everything at it.”

Freegate and Ultrasurf each employ their own anonymization protocols to allow users in China to access the Internet without impediment—one simply downloads a small program, and the free Internet presents itself.

Data anonymization is the process of destroying tracks, or the electronic trail, on the data that would lead an eavesdropper to its origins. An electronic trail is the information that is left behind when someone sends data over a network.

The applications present a problem for the authorities because the more aggressively they try to shut them down, the greater they risk closing off the Internet entirely—which they want to avoid.

Freedom online has become an especially precious commodity, given China’s recent all out attempts to effectively create its own intranet.

A Raft of Restrictions

The Chinese Communist Party has always sought to control the Internet and block applications like Tor (which it has) and Freegate (which it can’t)—but analysts agree that in the last few months, these efforts have grown in urgency.

The Party in early 2014 publicly revived its “leading group on Internet security and informatization,” which handles the commanding heights of cyberpolicy. The overall goal of this group is to boost China’s indigenous technology industry and bring closer cooperation among the various departments on Chinese Internet policies and controls.

Most recently, their attention has shifted to blocking a host of virtual private networks, or VPNs, widely used by expats and other technically inclined users inside China. Such VPNs, which create an encrypted tunnel from the client computer to a server outside China and access the Internet through that server, typically cost around $10 a month. They allow users to visit Facebook, YouTube, Gmail, and other sites blocked in China, delivering to the reader news and perspectives unavailable on the official Internet.

Businesses in China often rely on VPNs for their basic operational needs—like syncing sales data through Google services, or similar uses. VPN providers like Astrill, Golden Frog, and StrongVPN, all acknowledged in recent statements that their services appeared to have been targeted. Some were able to resume service later, while others suffer intermittent outages.

Gmail was completely blocked late last year, after other Google services were also blocked in about June of last year. Moreover, Chinese cyberforces appear to have begun using so-called man-in-the-middle attacks on users who try to access Yahoo, Google, Microsoft, and Apple services in China—the attack seeks to intercept and spy on traffic between the user and the service.

Western tech firms in China are also being forced to submit to “security” screenings of their products, and even hand over their source codes. This demand for “secure and controllable” technology triggered the American Chamber of Commerce in China, and other groups, to write a letter to Secretary of State John Kerry asking for help.