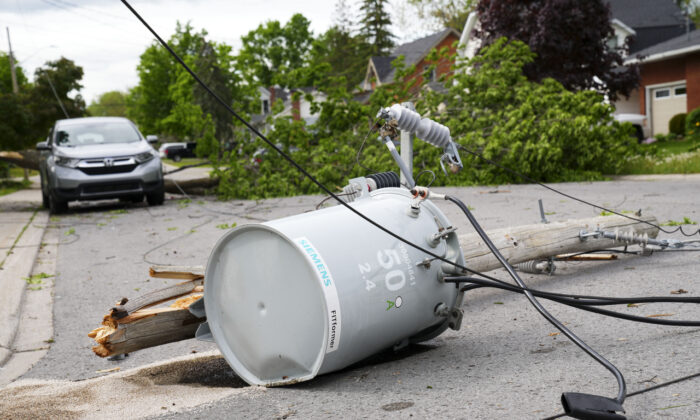 Hydro infrastructure and trees sit broken on a street in the Ottawa Valley municipality of Carleton Place, Ont. on May 23, 2022. A major storm hit the parts of Ontario and Quebec on May 21, 2022, leaving extensive damage to infrastructure. (The Canadian Press/Sean Kilpatrick)
Canada

The storm that hit Ottawa on May 21 brought strong winds that reached 190 kilometres per hour in some areas, a research group says.

The storm that left at least 8 people dead and thousands without power wasn’t caused by a tornado, but instead by what is known as a derecho—a devastating wind system that can travel long distances rapidly, according to Western University’s Northern Tornadoes Project (NTP).

“Analysis of the data reveals that a particularly intense downburst, not a tornado, was responsible for the damage” in southern Ottawa, NTP said on Twitter on May 25.

Maximum wind speeds reached 190 km/h, with the intensity of wind damage measured as EF2 on a scale from 0 to 5 on the Enhanced Fujita scale, the research group said.

The group also shared a map of the worst-affected areas that suffered EF1 and EF2 levels of damage, stretching five kilometres to as far as Plantagenet township.

A preliminary map of the worst-affected area on May 21 is shown below (green pin EF1, yellow pin EF2). However, intermittent intense damage along a path ~5 km wide continues ENE at least as far as Plantagenet. Additional details on that damage will be forthcoming. #ONStorm 2/2 pic.twitter.com/iTTChRWmDx

As of May 26, Hydro Ottawa said it is still working in some of the worst-hit neighbourhoods in the city, including Merivale, Woodroffe, Greenbank, Pineglen, Overbrook and Elmvale Acres. While it didn’t give a set restoration timeline, the company said on Twitter that it is hopeful to have the bulk of its systems back by May 27.

Hydro Ottawa said in a Restoration Advisory on its website that it has restored power to roughly 135,000 customers as of May 26, while about 45,000 customers are still without power.

The company said on May 25 that it will temporarily remove the outage map from its website due to the complexity of overlapping outage areas that no longer reflect the current situation.

On May 25, Toronto Hydro said it has restored power to 99 percent of its customers, and its crews are now mobilizing to assist Hydro Ottawa to bring power back to the national capital.

Speaking on Newstalk 580 CFRA on May 25, Ottawa mayor Jim Watson said Ontario Premier Doug Ford has assured him that the province will be covering the costs of the storm cleanup.