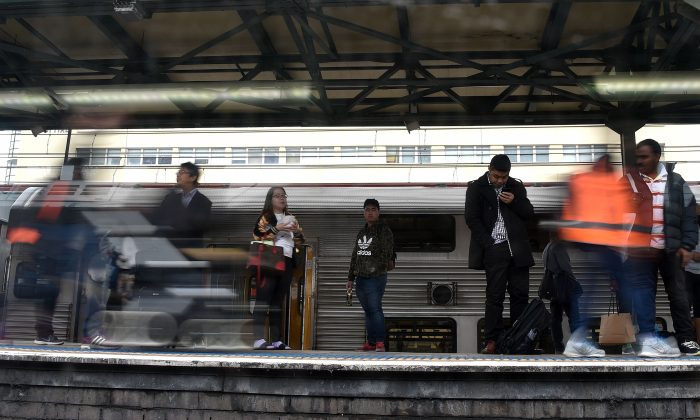 Passengers, seen through a train window, wait on the platform in central business district of Sydney on April 11, 2017. (SAEED KHAN/AFP/Getty Images)
Australia

Strikes to Shut Down All Sydney Train Services for 8 Hours

Sydney commuters need to plan around major disruptions as the entire New South Wales (NSW) train network will shut down between 8 p.m. Monday and 4 a.m. Tuesday due to planned strikes.

Transport NSW warned that train frequency would begin slowing significantly from 6 p.m., and some people could be left stranded.

Some services for intercity and regional services will be suspended from 3:30 p.m. and will resume at 5:30 a.m. on Tuesday.

Buses will replace trains on all lines during the eight hours of planned industrial action, but commuters are being encouraged to find alternative travel means or avoid unnecessary travel.

NSW Transport warned there would be flow-on effects later in the week as it is the busiest week of the year with many services fully booked. As a result, customers may not be able to switch to a different day.

The department also warned drivers to expect heavier traffic than usual as commuters are re-directed onto the roads.

The Rail, Tram, and Bus Union (RTBU) escalated its industrial action from last Tuesday when it called on the NSW government to “tear up” its contract with a Spanish company to manufacture a new fleet of trains.

The union said that the Spanish company was also responsible for the inner-west trams, which are currently not in operation because of cracking.

“This NSW Government’s shocking handling of transport is all being laid to bare at the moment, but rather than moving forward and addressing the obvious failings, the Perrottet Government is insisting on pushing back against workers’ basic safety needs,” RTBU NSW Secretary Alex Claassens said.

Claassens said the action would impact commuting services overnight, however, the union would ensure that freight trains would not be affected.

“We’re very aware of the impact this will have on commuters, but we also know that not taking action will leave workers and commuters at risk,” he said. “We are pulling out all the stops to ensure that vital freight movement is not impacted at all, though, so people’s Christmas presents and other vital goods will still get through.”

NSW TrainLink Chief Executive Dale Merrick called on the unions to stop the action while the bargaining process continues, noting it would particularly impact regional customers travelling home for Christmas.

“This is a significant disruption that means many regional and rural customers will not be able to travel, have a dislocated journey on road coaches or will need to make other plans,” he said.

Merrick asked the unions to consider withdrawing the action in the lead up to Christmas so customers are not further affected.

“We want unions to consider withdrawing the action altogether and focus on taking the bargaining forward. Progress has been made—we have made a fair and reasonable offer to the combined rail unions for them to consider. That’s exactly what they asked us to do,” he said.

NSW Transport said it offered workers new enterprise agreements, including a 2.5 percent pay rise in the first year. However, the union is asking for a pay rise of 3.5 percent.