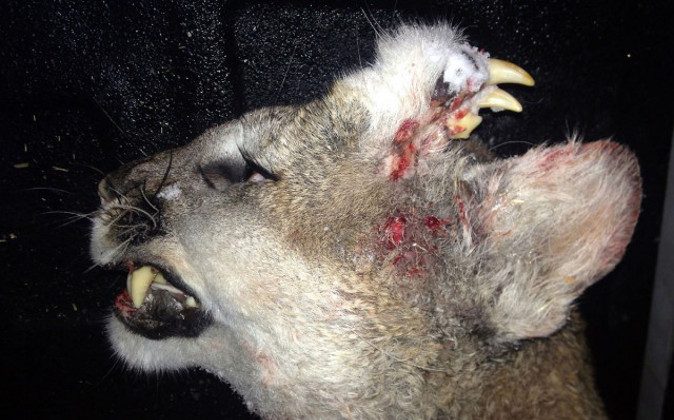 A strange looking Cougar was discovered in the community of Weston just 12 miles south of the Idaho-Utah border, per the Idaho State Journal.

A photo of a cougar with what appears to be teeth growing out of its forehead as shown above was shot by an anonymous hunter last week. Photos of the cougar were then turned in to Idaho Fish and Game’s Southeast Regional Office in Pocatello by the conservation officer who inspected the cougar.

This is certainly not a new species of cougar, but some kind of deformity. As to what caused this deformity, Biologists and Veterinarians at Fish and Game are still at a loss.

One explanation is that the cougar had a conjoined twin while in the mother’s womb, but the twin died, and was subsequently absorbed by the surviving cougar.

Conjoined animals are very rare in nature, but there have been instances of it among humans.

Another conjecture is a teratoma, a type of tumor that normally contains hair, teeth, and bones, but also more complex body parts such as parts of organs, eyes, or fingers. These types of tumors are also quite rare.

A third unlikely explanation would be that the cougar injured its jaw and its teeth recovered in an abnormal way. However, upon inspection, the cougar doesn’t appear to have any injuries to its mouth.

The cougar is currently in the possession of the hunter who shot it, who plans to have the carcass stuffed and taken to a taxidermist. Idaho Fish and Game hopes that they can bring the cougar back in for X-rays and a more detailed analysis.