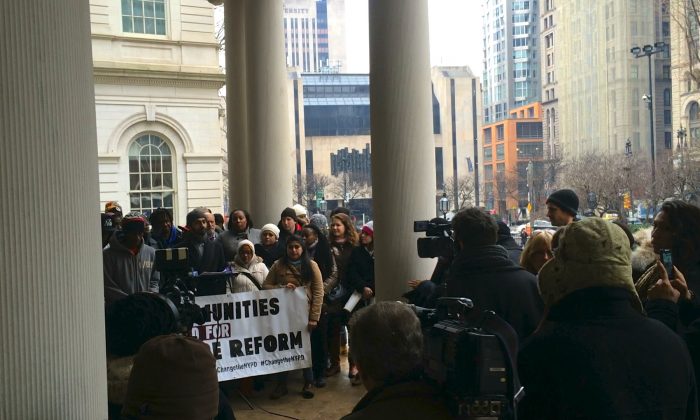 NEW YORK—Community activists said on Friday that the battle to stop the NYPD from engaging in biased-based profiling isn’t over.

Back in August, after a long political battle, the City Council passed Local Law 71. The law is designed to curb the NYPD’s profiling based on factors like race, religion, sexual orientation, or housing status.

In October, the police union responded with a lawsuit to block the law.

At a Communities United for Police Reform press event at City Hall on Friday, activists called on the Police Union to drop the lawsuit.

“It’s time for the Police Unions to stop trying to turn back the clock on progress in the fight to end discrimination in New York City,” said Andrea J. Ritchie, a co-coordinator at Streetwise and Safe.

But the Police Union argues that Local Law 71 could subject officers to unjustified lawsuits by people who claim the police racially profiled them.

The law does allow citizens can sue specific police officers, though not for monetary damages.

Supporters say the law is needed to reign in bad police behavior that is still occurring, despite the law already being in effect.

“I’ve seen very recently, while out in my community, police vans pulling over and stopping innocent individuals who are just walking down the street,” said Djibril Toure from the Malcolm X Grassroots Movement. “I saw this actually last night.”