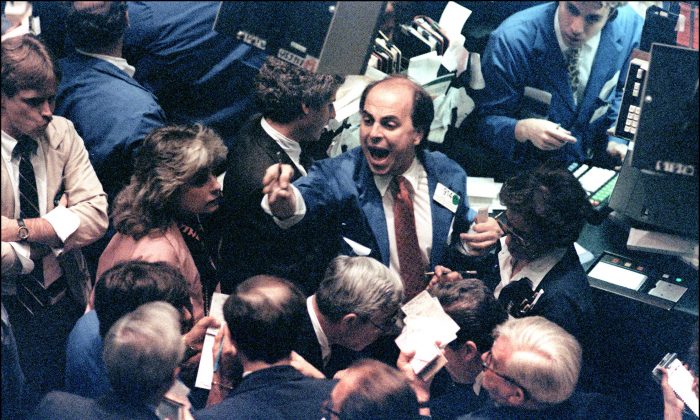 This photo from Oct. 19, 1987, shows a trader on the New York Stock Exchange shouting orders as stocks recorded the worst one-day decline in history. While a repeat of the historic crash in unlikely, markets today are vulnerable to a correction. (MARIA BASTONE/AFP/Getty Images)
News

Stock Market Slump Should Not Surprise

On Tuesday, the markets breathed a sigh of relief. Especially the Nasdaq dodged a bullet and rallied from losing 1.8 percent to close green for the day. Don’t let this dead-cat bounce fool you: the worst of 2014 is yet to come.

So far this year, all of the major indices are losing from 0.4 percent (Dow Jones) to 3.6 percent (Nasdaq). This is no catastrophe, given the spectacular run from 2013, and since the lows of March 2009. However, this five-year bull market displays many signs of stopping.

No matter where you look, the market looks overpriced, overbought, and overextended. Traditional valuation metrics put the 12 months S&P 500 forward price-to-earnings multiple (PE) at 16 and the Russell 2000 small cap index PE at 20.

While this is pricy in and of itself, analyst earnings expectations are always too high at market tops and usually fall faster than stock prices once the economy rolls over.

Alternatively, trailing 12 months price-to-earnings ratios use the earnings actually reported by the companies during the last 12 months. The problem: Stocks are even more expensive with the S&P at 18 and the Russell at 102.

Famous Boston asset manager GMO computes an expected equity return for S&P 500 value stocks of -2.5 percent per year over the next seven years and -3.1 percent for the Russell 2500 for the same period.

“If our forecasts are to be believed, then the current juncture represents a particularly bad point in time … as both value [stocks] and small [cap stocks] have very unattractive expected returns,” GMO’s James Montier writes.

Another long-term indicator, the Shiller PE, which smooths out earnings over 10 years and adjusts them for inflation, stands at 25. It presents secular buying opportunities—like at the beginning of the 1980s—at 5.

Money on the Sidelines

Proponents of higher stock prices often cite the “money on the sidelines” argument as a reason for stocks to go higher. This argument is so fraught with misconceptions, it deserves closer attention.

The argument stipulates that there are a lot of people who did not own any stocks throughout the rally and had their money in cash, on the sidelines. These people are getting weary as the market rises and will pay a higher valuation to stop missing out.

So how do you measure this “money on the sidelines?” The fact of the matter is, no matter how many people buy stocks, there will always be money on the sidelines. Why? If I buy 100 shares of stock from you, money goes from my trading account to your trading account in the form of a deposit. The money doesn’t go away; it is still there and worth exactly the same dollar amount as before. The only difference is that it’s on your sideline rather than mine now.

So any kind of analysis involving this money has to be a relative one. One measure, which comes pretty close to capturing the dynamic is the ratio of total money in money market funds—the preferred cash deposit vehicle for trading accounts—to total stock market valuation.

As more people want to own stocks, they are willing to pay a higher valuation for them, bidding up the total value of stocks and leaving the dollar amount of money market funds the same, absent further inflows. This makes deposit money worth less relative to stocks. This ratio is at a low point since the last top in 2007, which means money in terms of stocks is undervalued, not the other way around.

So absent of further inflows—we will speak about the Fed in a second—the only thing that can boost stocks even more is higher turnover. But trading volume has declined markedly from the highs in 2007 and is not showing any signs of coming back.

One source of additional buying power came from margin debt, which hit a record high of $445 billion in December 2013 for the New York Stock Exchange.

Margin buying works great if stocks keep going up, but leveraged buyers have to head for the exits very quickly once the first stop losses are triggered. Not a great support for a market like this.

Many of the factors described above were also in place the last couple of years. So what is different now?

The Fed has slowed its amount of asset purchases per month to $65 billion (the Taper), which during the last couple of tries—remember the end of QE1 and QE2—always led to a sustained correction in equity markets, until the Fed started boosting its quantitative easing program again.

Most people say that the Fed is still buying $65 billion per month, so what is the problem? The problem is that inflationary economics depends on relative changes in easing, not on absolute numbers.

As soon as the Fed said it would provide QE for a certain dollar value, the market started pricing in that easing, which will take a couple of months.

After the re-pricing is complete, even leaving the amount stable would not cause asset prices to rise anymore. Just look at Japan, where easing remained the same for more than a year, and yet stocks are going down.

The Fed would have to crank up the presses once again to effect a change. Reducing the amount of buying, by analogy, is tightening, and we are seeing this effect now in the markets.

Fed official Jim Bullard told investors as much in the fall of last year, but there is also statistical backup. An analysis by Citigroup shows a very high correlation between the rate of change of the Fed’s balance sheet over a 13-week period and the return of the S&P over the same period.

Given the vulnerable state of the market and the lack of support from the Fed—for now, if they increase QE again, the picture will change. The only thing missing is a trigger for a real sell-off.

In this case, the geopolitical situation in Ukraine, which is spiraling out of control, could be the straw that breaks the market’s back.