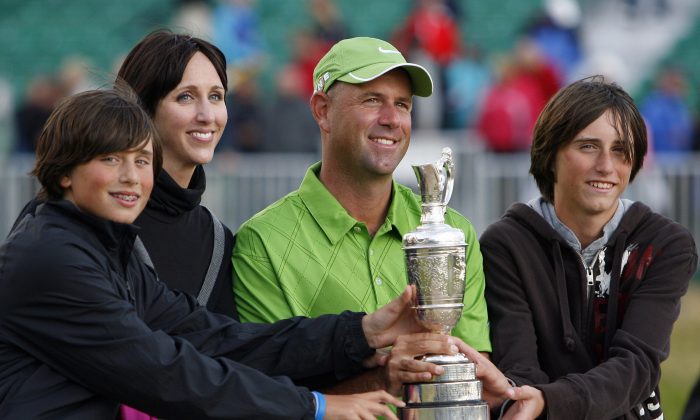 Stewart Cink (2nd R) won the British Open in 2009 with his wife Lisa (2nd L) and children Connor (R) and Reagan (L) by his side. (Peter Muhly/AFP/Getty Images)
Golf

PGA Golfer Stewart Cink, 42, announced he’s taking an indefinite leave of absence from the PGA Tour to support his wife Lisa, who was diagnosed with breast cancer last week.

“Since I was 15 years old, Lisa Cink has been my biggest supporter. It’s now time for me to return the favor,” the five-time Ryder Cup player posted on Twitter.

Since I was 15 years old, @lisacink has been my biggest supporter. It’s now time for me to return the favor. pic.twitter.com/4mVRMsmfL4

“Last week my wife, Lisa, and I received some unfortunate news. Lisa has been diagnosed with breast cancer – a startling and unexpected revelation for everyone in our family.

We are still in the process of figuring out exactly what she is fighting, and the uncertainty continues to be very difficult. However, we serve a great God, and our friends and family have been and will be by her side every step of the way.

In order to assist Lisa in meeting this challenge, I will be stepping away from competitive golf until circumstances improve for her. Hopefully that day will come quickly.

Please keep our family in your thoughts and prayers as we move forward.”

Cink is best remembered as the guy who beat then 59-year-old Tom Watson in a playoff to win the 2009 British Open for his first major victory. The dramatic win remains the last of six times Cink won on tour.