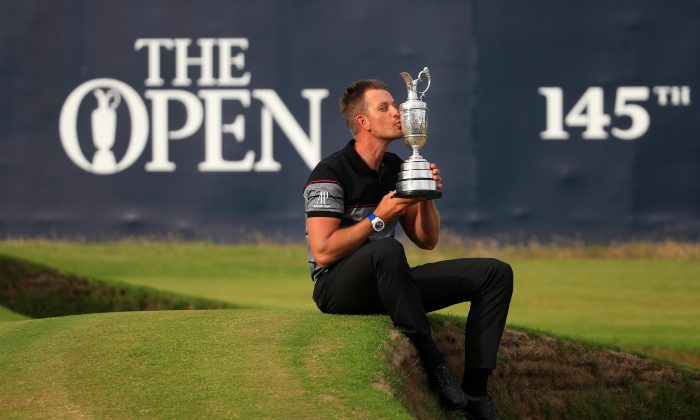 Henrik Stenson celebrates victory as he kisses the Claret Jug on the the 18th green after the final round on day four of the 145th Open Championship at Royal Troon on July 17 in Troon, Scotland. (Matthew Lewis/Getty Images)
Golf

TROON, SCOTLAND. When Tom Watson and Jack Nicklaus went head-to-head 39 years ago at Turnberry during their epic meeting it was quickly dubbed, “The Duel in the Sun” for the sunny dry weather the event featured. Both men were at the height of their games and it was Watson besting Nicklaus with stunning play on the weekend rounds—shooting consecutive 65s to edge the Golden Bear by one stroke while setting a record Open aggregate total of 268 at that time. Few ever thought such an incredible shot-making display would ever be rivaled—let alone surpassed.

Henrik Stenson earned his first major and did so in a fashion that will long be remembered. The 40-year-old Swede entered the final round one stroke ahead of American Phil Mickelson. The margin between the top of the leaderboard and the next golfer after Lefty was six strokes further back. At the end of Sunday’s final round the 3rd place finisher would be 14 strokes behind Stenson—the first Swede to ever capture a major championship. In the 1977 Open it was Hubert Green—the 3rd place finisher at the Turnberry Open—who finished 10 shots by Watson and amusingly said, “I won the golf tournament. I don’t know what game those other two guys were playing.”

The caliber of the golf was nothing short of sensational. Stenson finished the event with a new Open aggregate record of 264 thanks to a final round 63. For the 46-year-old Mickelson it is a bitter pill to swallow, earning him his 11th runner-up finish in a major.

Stenson and Mickelson put on a final round display of tour de force golf, Henrik making 10 birdies—no misprint—and Phil adding four along with an eagle, with no bogeys on his card. In just about any other major if one trails the leader by one stroke and you shoot a concluding 65 it likely means victory. Not this time.

Coming down the stretch of a major event is always a pressure packed situation and the conclusion at Royal Troon was no less. Stenson finished his round in grand fashion. Leading Mickelson by only one stroke with four to play, the Swede drained a 51-foot birdie putt at the demanding par-4 15th to extend the margin to two strokes.

On the par-5 16th Mickelson hit a herculean 279-yard 3-metal which reached the green leaving him inside of 30 feet for an eagle. Stenson missed his 3-metal shot to the left of the green and made a solid chip bringing his ball to roughly six-feet for birdie. Phil took dead aim at the hole and his putt only veered off on the final turn of the putt. A second eagle on the day for Phil would have made for a more demanding birdie putt for Stenson. That did not happen—Henrik sunk his putt and the lead remained two.

The long par-3 17th once again played a key role. Stenson made a decisive approach with a four-iron from 221 yards away and superbly got his ball to within 8 feet for another birdie. Mickelson missed the green to the left and after getting to the putting surface was able somehow to drain a 20-foot par putt. Stenson could have locked up the event with a birdie but he missed on the low side and the duo headed to the final hole with the Swede remaining two shots ahead.

On the challenging par-4 18th, Stenson hit a long 3-metal approach that stopped just short of the right fairway bunker which buried the hopes of Australian Greg Norman in the 1989 Open playoff. The ball was literally one yard away from reaching the deep pit. Mickelson also reached the fairway and his approach left him with a lengthy birdie putt. Stenson hit a pitching wedge into the green and was left with a 20-foot birdie try. Once Mickelson missed his birdie Stenson was left with three putts to win the Claret Jug. The Swede ended the event in grandiose fashion—the putt taking the right hand entrance to the hole and having Stenson do a delayed exultation. The end result—63 for Stenson to a 65 by Mickelson—and a win by three strokes and Henrik rightly saluted as the 2016 “Champion Golfer of the Year.”

“It makes it even more special to beat a competitor like Phil,” said Stenson, who at sixth in the world was the highest-ranked player without a major, having five times finished in the top-3. “He’s been one of the best to play the game, certainly in the last 20 years. So to come out on top after such a fight with him over these four days, it makes it even more special.” Stenson’s best Open finish came in 2013 as runner-up—ironically the year Mickelson won his first Open Championship at Muirfield.

Mickelson was looking to end a victory drought taking him back to Muirfield in 2013. His play this week was something few had seen coming but it showed that the five-time major winner still has game to compete at the highest levels.

“It’s probably the best I’ve played and not won,” Mickelson said. “I think that’s probably why it’s disappointing in that I don’t have a point where I can look back and say, ‘I should have done that or had I only done this.’ I played a bogey-free round of 65 on the final round of a major. Usually, that’s good enough to do it, and I got beat. I got beat by 10 birdies.”

In past majors in which Mickelson has been in the hunt there have been several occasions where sloppy play caused his undoing. Lefty’s play was sharp all week and his grit was in top form when misses did come, showing a resolve to stay the course and make crucial par saves when called upon.

Stenson shot four rounds in the 60s, finished at 264—the lowest aggregate total for any major championship—and at 20- under-par, which matches the record in relation to par set by Jason Day at the 2015 PGA Championship.

The Swede also matched the lowest final round score in a major with a 63—tying the mark set by Johnny Miller who in 1973 won the U.S. Open that year at Oakmont with his final round gem. And Stenson eclipsed the final round 64 Norman scored in winning the ’93 Open at Royal St. George’s. What’s even more amazing is that Mickelson also had a 63 in this championship—coming in the first round—and nearly holing a birdie putt on the final hole that day for a 62.

Stenson becomes just the 9th player to garner his first major after turning 40. At no time during the final 40 holes were the two competitors ever separated by more than two strokes until the Swede dropped the final putt at the concluding hole. Stenson’s win also ended a streak of American winners at Troon dating back to 1950.

In less than two weeks the final major event will commence at the PGA Championship at Baltusrol Golf Club in Springfield, NJ. Being able to top what was done at Royal Troon will certainly be one tough act to top.