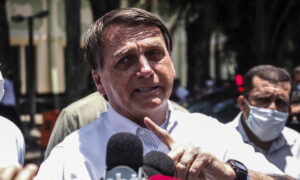 NEW YORK—One Democratic U.S. representative from New York City has gone against the grain of his own party by voting against the historic health care bill that passed the House of Representatives on Saturday night.

Rep. Michael McMahon of Staten Island and Brooklyn criticized the bill, which puts health care more in the hands of the government, for being too expensive, increasing taxes too much, and cutting Medicare too much.

“I believe that the net negatives of this bill outweigh the positive effects for Staten Island and Brooklyn residents,” said McMahon, in a statement posted before the bill passed.

The bill that narrowly passed, 220-215, is estimated to cost taxpayers over $1 trillion over a decade and was unanimously opposed by Republicans, who are in the minority.

McMahon pointed out that the bill includes a tax increase that is not indexed to inflation. He also said that Medicare Advantage, which serves approximately 40 percent of seniors on Medicare, would be cut dramatically, leading to significant monthly average premium increases of $130 per person per month.

“I ran on the platform of reforming our health care system while containing costs and improving access for Staten Islanders and Brooklynites,” said McMahon, who was elected in 2008 to a seat held for 12 years by Republican Vito Fossella. Previously, McMahon was a city council member.

McMahon did praise the bill and left the door open to vote favorably on it down the road after it gets integrated with the Senate’s version.

“This legislation contains laudable reforms which I support; it allows individuals to keep coverage when they leave a job and young people to remain covered under their parents’ plan, and bans discrimination based on pre-existing conditions,” he said.

The lifelong Staten Island resident also offered ways to improve health care that don’t focus on universal coverage, but instead on reducing health care cost and reforming the market.

“We can begin by reforming the insurance market, eliminating discrimination based on pre-existing conditions, and creating a system to help those who can’t afford insurance obtain it, while also addressing the increasing premium costs for families,” he said. He also favors allowing cross-state border competition so people can shop for lower rates, a measure favored by Republicans.

The next step for the bill is for the Senate to consider its own version and then for the two versions to be integrated into one and approved by the president.

President Obama said in a statement after the bill passed Saturday: “Now the United States Senate must follow suit and pass its version of the legislation. I am absolutely confident it will, and I look forward to signing comprehensive health insurance reform into law by the end of the year.”