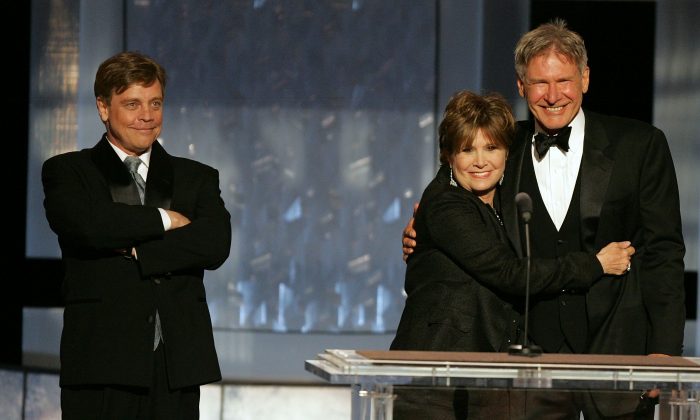 (L-R) Actors Mark Hamill, Carrie Fisher and Harrison Ford at a tribute to George Lucas in 2005 in Hollywood. The trio are slated to star in Star Wars Episode 7. (Kevin Winter/Getty Images)
Entertainment

The trio are slated to report to work in March or April, she told TVGuide, one of the first pieces of news indicating when filming will begin.

“I’d like to wear my old [cinnamon buns] hairstyle again — but with white hair,” she said. “I think that would be funny.”

J.J. Abrams said before that production would begin in spring 2014.

He said last week that the script is finally complete.

Since Michael Arndt departed as writer in the fall, J.J. Abrams and Lawrence Kasdan were working on revising the script.

The pair want to focus on the three main characters from the original series in Episode 7, so audiences can enjoy them one last time. Episode 8 and Episode 9 will then focus on their offspring, who would be in supporting roles in Episode 7, reported the Hollywood Reporter. George Lucas, who directed the original movie and the recent trilogy, was involved in the debate but has ultimately let Abrams and Kasdan decide.