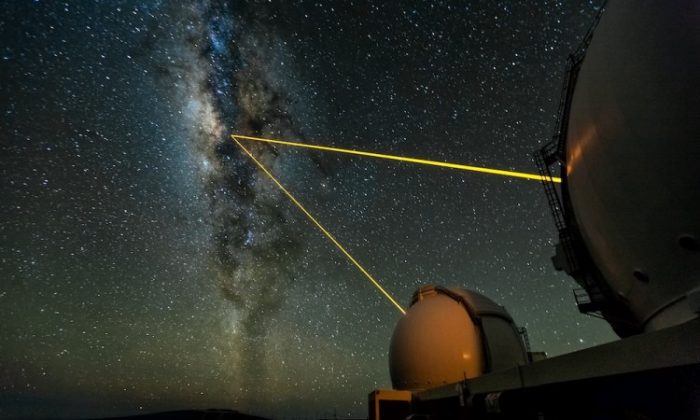 http://newsroom.ucla.edu/portal/ucla/news.aspx The two W. M. Keck Telescopes in Hawaii observing the galactic center. Using the adaptive optics technique, the lasers create an artificial star in the Earth’s upper atmosphere, which allows measurement of the lower atmosphere's blurring effects (that makes stars twinkle in the night sky). The blurring gets corrected in real time with the help of a deformable mirror. (Ethan Tweedie)
Science

A star discovered orbiting the black hole at our galaxy’s center could help test whether Albert Einstein’s theory of general relativity is valid near a black hole.

Known as S0-102, the star spins around the black hole every 11.5 years. Previously, only a brighter star called S0-2 was known to closely orbit the galactic center every 16 years. Most of the stars circle it every six decades or more.

Although black holes cannot be seen directly, they can be studied via their effects on nearby stars.

“It is the tango of S0-102 and S0-2 that will reveal the true geometry of space and time near a black hole for the first time,” said research leader Andrea Ghez at the University of California-Los Angeles (UCLA) in a press release. “This measurement cannot be done with one star alone.”

Einstein predicted that mass distorts space and time, thus slowing down time and altering distances. Like S0-102, S0-2 is in an elliptical orbit.

“Showing that it goes around in an ellipse provides the mass of the supermassive black hole, but if we can improve the precision of the measurements, we can see deviations from a perfect ellipse—which is the signature of general relativity,” Ghez explained.

S0-2 will approach the black hole most closely in 2018, when it is expected to accelerate by more than 250,000 miles per hour. Its motion will be influenced by the curvature of space-time, and light reaching Earth will have been distorted.

The study will be published in Science on Oct. 5.