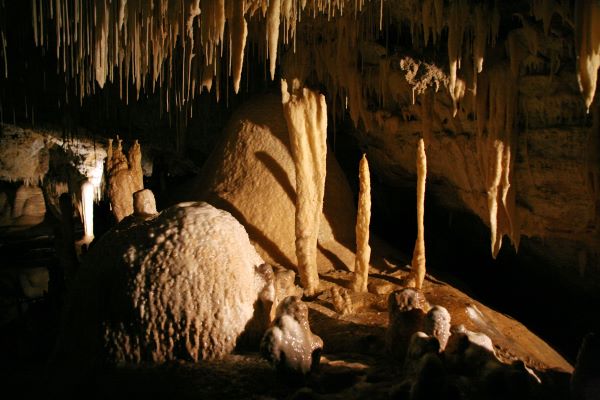 The stalagmite studied was extracted from Yonderup Cave in WA, and preserved a record of climate conditions and fires, enabling researchers to link-local fires with climatic precursors.

This is the first study to examine a stalagmite’s geochemistry in order to understand historical bushfires, and researchers speculate that this change in frequency and intensity of fires is associated with changes in land management practices.

Dr Liza McDonough from Australia’s Nuclear Science and Technology Organisation (ANSTO) and lead author of the study, which was conducted with the University of New South Wales and other universities, said in a release on Thursday that the largest fire event in the stalagmite record occurred in 1897 and coincided with a drought which had lasted for decades.

“The intensity of this fire was likely caused, at least partially, by these dry conditions,” she said.

“We also know that this [the largest fire] occurred a few decades after Indigenous cultural burning would have been suppressed by Europeans, so the fire was also probably exacerbated by a build-up of understorey vegetation and dry combustible material on the forest floor due to the removal of Indigenous land management practices.”

According to the Indigenous Knowledge Institute at the University of Melbourne, Indigenous peoples of Australia used fire intentionally and frequently to reduce fire loads, hence lowering the risk of large and intense wildfires, and increasing productivity of preferred foods by creating grasslands for kangaroos, as well as for yam and grain cultivation.

The technique used to study the stalagmite’s geochemistry utilises its composition, the variation in its elements, and the order in which they were laid down.

“Nutrients such as phosphorus, and trace metals are found in bushfire ash and, in theory, can dissolve into waters that eventually infiltrate underground caves,” McDonough said.

“Our research provides the first evidence that water containing high concentrations of these dissolved ash-derived elements can also alter the chemistry of a stalagmite and result in the preservation of signals from past fire events.”

McDonough explained that stalagmites had not previously been identified as archives of past fires because, due to the incredibly slow growth of stalagmites, the latest high-resolution geochemical techniques are required.

“In one year, a stalagmite increases in height by the same thickness as that of a sheet of paper,” she said. “The geochemical trace left by a fire would be even thinner.”

The portion of stalagmite used in the study is relatively young, only allowing scientists to look back 260 years, whereas older stalagmites and cave ornaments promise to provide data stretching back thousands or possibly tens of thousands of years.

“Further investigation of the combined climate and fire records captured in stalagmites will allow us to understand the climatic conditions required for large bushfires to occur, which is essential to properly prepare for and mitigate the impacts of large fire events,” McDonough said.