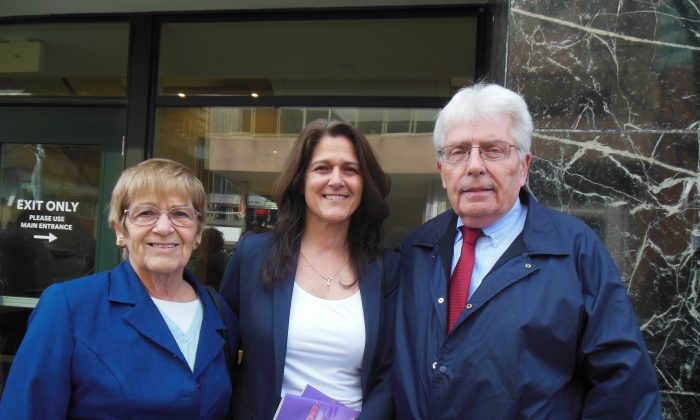 STAMFORD, Conn—Brightly colored costumes catch the eye as dancers float across the stage before a dazzling backdrop depicting the heavens.

This opening scene of the production of Shen Yun Performing Arts transfixed audience members at the Palace Theatre in Stamford, Connecticut on March 30. The next two hours they were taken on a journey through 5,000 years of Chinese history, told by a combination of dance, music, and song.

Among the audience members was Roy Reese, superintendent of schools at Washingtonville School District in New York and stage lighting designer, who attended the performance with Andrea Ricciardi, a school administrator, and Marie Ricciardi, a retired accountant.

“It was outstanding,” said Reese.

“It was gorgeous. The movements were just beautiful. They were like gliding across the stage. Just simply beautiful,” said Andrea.

“It was so different. It was fantastic,” said Marie.

Reese, who is a lighting specialist for theaters, was impressed with each component of the stage production.

“The lighting, the choreography, the acrobatics, the music was phenomenal,” he said.

However, as a lighting professional he was particularly interested in that aspect of the performance.

Reese was so curious about the lighting that he even went down to the stage after the performance, as he was seated at the back of the theater, to inspect the setup.

“I had to see that, it’s excellent. Yes, I even learned something,” he said.

Asked about what he learned, he said: “I like the way the lights came up center stage toward the end of each piece. It was excellent.”

The interaction between the 3-D backdrop and the lighting, which may not have been apparent to the casual eye, also intrigued the lighting designer.

“I also like the way that projection was not interfered with [by] the lighting,” Reese said.

“Because they kept [the] upstage … dark and all the lighting was mostly downstage. It was subtle upstage but very bright downstage.”

The backdrop itself was also a stand-out for Reese.

“I’ve never seen projection like that in any theater,” he said.

“It was phenomenal [the] way that the projection coordinated with the movement on stage. It was great.”

Finally, as with many other audience members, Reese was drawn to the vibrant colors permeating the performance.

“There were no ways to describe the color, from the costumes to the scenery in the back,” he said.

Overall, the artistry of the performance left a firm impression on Reese., who looked forward to Shen Yun’s new production next season.

“I can’t wait to next year to see the other show.”